June 13, 2013
At last a good day's work on the book. Head full of Zen stuff as a consequence and did an ensō this morning, which I found rather fun, and instructive as I found myself writing about them.

A very nice letter from Helen Moser my new pen friend in Germany, who has shown my poem about Heidegger to Dr Denker the head of the Heidegger archive close to where she works as a translator, and he liked it.

At three, and having worked steadily since eight, the brain was empty. What better time then to zoom off to see Janet and Ken, via the Real Patisserie where I scored some incredibly delicious strawberry tarts. Long, wide ranging chat with Janet and Ken and Huss over aforementioned tarts and cups of tea.

Home, and Lorraine was back home at a good time at last. We cooked and ate steamed veggies, fish and brown rice then as it was still light and the weather suddenly improving we sauntered around the park for an hour, watching a noisy jays versus rook war on the top of a large tree, and discovering that the two large hollow English Elms near the walled garden are called the Preston Twins, and are 400 years old. This makes them the oldest extant English elms in the country, if not the world. Brighton and Hove's elms mysteriously survived the virulent Dutch Elm Disease that has destroyed the UK's elm population since the 1970s. Long may they survive.

Sauntered about in the rock garden, enjoying flowers and being outside for some time, then home to watch a BBC documentary about cats who were running about doing cat business with cameras on their collars. If there's one thing I learned is that cats lead double lives.

Below this morning's ensō. 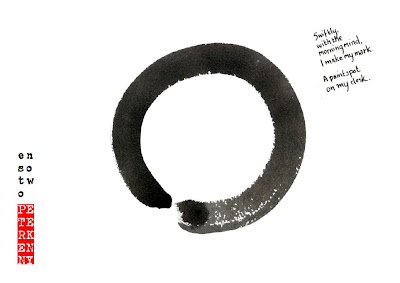 a said…
I gather that part of the protection from Dutch Elm Disease is to do with the Downs - i.e., the bugs or beetles which cary the disease couldn't quite make it over the hills…
9:21 am