June 28, 2013
Somewhat blearily off to work this morning, hung over and leaving keys behind. Keen to get in early but today the train was late, and it was raining. Disclosed the concepts I had been working on this morning, and everyone seemed pleased, which was good.

Off for lunch at a pub called The Somers Town Coffee House, actually a boozer, but a rather nice one, which served food in lunchoxes. Regrettable amount of punning ensued with the gentlemen admiring one another's lunchboxes, and me asking First Matie not to look at mine and so on. Food in the boxes fine too. Walked back to the office with Slug, having sensibly drunk only soda water. Getting on really well with Slug these days.

Feeling a bit tired this afternoon, and was pleased when I could answer the call of the seagull and I could return to Brighton. Very tired, and tried to reboot myself by listening to a guided meditation. Arrived home just as Malcom and Lynn were arriving. Had some bubbly with them, and opened a present they bought, which was a picture Malcom had done from a picture of Lorraine and I kissing on Icart, that was on this blog shortly after I proposed. An incredibly thoughtful surprise. Then off to The Shahi for a nice meal and a good chat. They are good cheery company at the end of the week -- added to when Betty arrived home for the weekend.

Haven't had a chance to take many photos, but stole this from Matty-boy who took a snap of my lunchbox. Not featured the chicken and salad sandwich that was inside it. 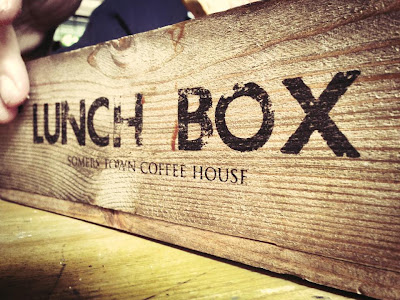