June 21, 2013
Worked at home, then packed up and went to the gym for another workout. From there to the ideologically unsound Starbucks where I consumed a cinnamon swirl and a large cup of tea, and had another good session. I can't understand exactly why I work well in Starbucks when I have a perfectly good study. I can only put it down to a simple change of perspective, and perhaps that I had been exercising in the gym. Really making great strides with the book.

In the afternoon contacted by the folks in Tavistock Square, to discover that I am wanted for freelance up in London next week. Only omnipotent God knows what the story will be on Monday. But the prospect of a bit of coffer top up definitely pleasing.

Lorraine out with various ladies, and Anton, called around for me. He was only partially recovered from a lively night taken out by the agency he employs, which involved several shots called Jägerbombs. I had a few drinks as Anton supped glasses of water and the occasional half, in The Signalman and slightly lairy The Open House and the occasional half before he retired home.

I went to Circus Circus, where my lovely Lorraine appeared at my elbow as I approached the bar, and we sat chatting happily about our various plans and schemes happily for a while before we sloped home. I again bought an Ace pizza which regrettable, but strangely delicious.

A happy end to the week.

Below interesting how Anonymous and other groups are inspiring a new generation of political consciousness. These flypost in Brighton featuring the now ubiquitous anonymous face based on the Guy Fawkes character in Alan Moore and David Lloyd graphic novel V for Vendetta. 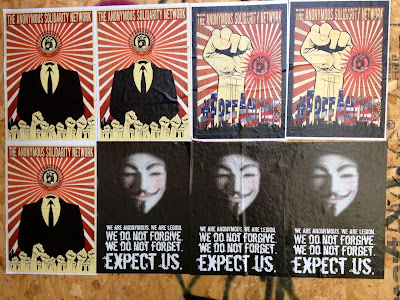