March 25, 2020
Slow progress today in Kenny Towers. Lorraine working from home, which was nice. Chats and messaging with folks, including Mum.  Feeling a frustrated with what I was doing by the late afternoon, I went for a short walk and took the opportunity to pop into the off licence to buy four cans of lager from the empty off license. The owner disinfecting things when I arrived, and served me with blue latex gloves. Sadly the finger tip had come through one of them.

The idea of drinking beer in the sunshine seemed suddenly be exactly the thing a right thinking person like myself should be doing.

So I scurried outside into garden and drank lager. Soon to be joined by Betty and Lorraine. A holiday mood descended on us temporarily in the warm afternoon sunshine. The four cans were used up fairly soon so Lorraine popped out for a few more. Soon however the sun dipped towards the horizon, it was had got too cold. It is only March after all.

After sundown and dinner we went in and played Trivial Pursuits. As I had my drinking boots on I had a small glass of whisky to round off the evening.

This dark edged bee fly landed on the wall by my head when we were outside. 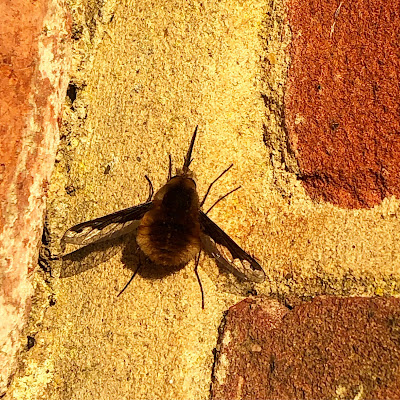