An interlude with the Bard

March 21, 2020
So a cool and sunny Saturday. Lorraine absolutely exhausted by managing the events of the week. Next week she will have only a skeleton school with a handful of children in it. But new rotas and responsibilities have to be worked out. The children have been sent home with work to do, but there will be no examinations this year.

We however got up fairly early for us, on a Saturday. Had breakfast with Beth and then Lorraine spent much of the afternoon dozing. She and I went out for a walk in Preston Park this afternoon. Quite busy, although we kept as far apart from people as was possible.

Lots of messaging today. This connected world comes into its own, at times like this. Heard from Richard in Guernsey, with a poem saying that weirdness was normality now. I hate the idea of Guernsey becoming infected, as it now is, as to me it was a place of safety in my imagination. I can't wait to get back there when all this has passed.

Richard sent me a pdf of Shakespeare's Sonnets Abridged Beyond the Point of Usefulness (by someone rejoicing in the name of Zach Weinersmith) In boiling down sonnets to two lines it is incredibly useful. By coincidence I had just found The Shakespeare Trio's Shakespeare's Sonnets Vol 1 on Spotify. This first album when it was just Dipak and Richard Gibson was excellent. The abridged sonnets describes in simple terms the triangles of relationships in the sonnets.  One of the sonnets on the CD is 42, which Weinersmith glosses in the abridged version...

'Note: Sonnets 40-42 focus on how the Hot Guy from previous sonnets keeps sleeping with Shakespeare’s girlfriend.'

42
We’re one. By transitivity:
When she does you, she’s doing me.

If you don't have spotify, here is The Shakespeare Trio's Sonnet 42 on YouTube.

Beth, Lorraine and I watched the first Star Wars film today. It's still great fun, and its sound design,   TIE fighters tearing through space, the thrum of the Jedi light sabres, and so on.

Beth out to see Chloe tonight, whose daughter Tilly she is continuing to look after during this period. Chloe works in the NHS. L and I stayed quietly indoors as advised by Government. I had two cans of beer. All well.

Richard sent a picture of us in happier times. I am clearly emulating Richard trademarked white poetry reading shirt. 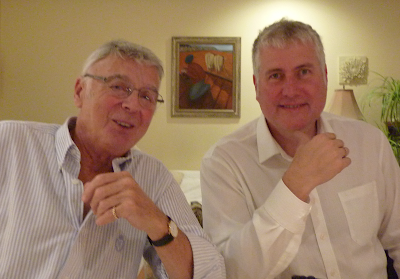