March 11, 2020
Up and did a smidge of work before heading down to the doctors for an 8:55 appointment. A very young woman doctor saw me exactly on time, and she was excellent. I went about my ears. which are in a parlous state. I have irritable eustachian tubes, which seem to affect my balance and give me tinnitus and so on. I did feel a bit a wuss sneaking in to discuss my ears, in the quiet before the storm.

The place was empty, and there were only one or two people in the spacious waiting room. Straight to the pharmacy to pick up some nasal drops, as all the tubes are connected in your head somehow.  Then to the pharmacy, where while I was there a French guy came in and said he had cold like symptoms. They asked him if he had a dry cough, and when he said yes the workers there took a step back. I was already a step or so back and added to them.

Other than that simply came home, walking through the park. Tiredness and lack of focus adding to the sore throat I've had and so naturally I had a flash or two of hypochondria, and making very slow progress today on my work. Went for another walk around the parks and came back feeling knackered after sauntering my10k paces. Chatted to Betty, ate some oranges, meditated and had a wee doze afterwards. Made a chicken stew, with chicken, ham, swedes, parsnips, potatoes, carrots, leeks, onions, garlic, cabbage and pearl barley. This went down well.

First Matie finished Magnificent Grace and texted me that she loved it.

Passed by a tree covered with droplets of water shining in a momentary appearance of the sun. An uncapturable passing vision of water droplets gleaming like Christmas lights. By the time my phone was out the moment had passed. But here is a drop of water on a budding branch in Preston Park. 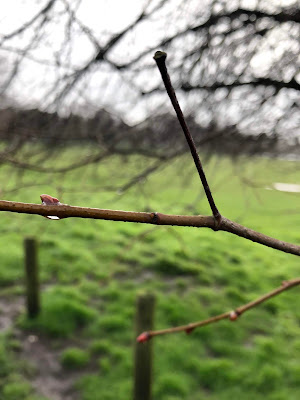