March 04, 2020
Very saddened to hear that Craig died this morning. Many heartbroken responses on WhatsApp, and Facebook. Although I'd not seen too much of him lately, we had swapped messages a few weeks ago as I had invited him to my party. Shortly before he told me he had been diagnosed with tumours. He spent the next few weeks in hospital and died peacefully and in no pain. His wife Mel and his very close pals are devastated. My favourite memory of him was when he came to Guernsey on my 50th as a surprise package with Matty boy and Katie, Lorraine having secretly liaised with them. Craig's open-hearted, open-minded delight in the island I love was typical of him. I loved his gravelly Minnesota voice too, and he was a natural storyteller. A lovely human.

This all put me off my stride a bit, and I did not feel like writing today. Instead, as Lorraine had taken the afternoon off to go with Maureen to the doctor about her knees and hips and walking. So I hopped aboard too, and we drove across to Ashford, and Pat and I watched an old black and white movie called A Portrait of Clare made in 1950, which for some reason I greatly enjoyed.

We went soon after to The Blacksmiths and had a meal there. I had scampi and chips, which is something I never order, and spotted dick and custard, which seemed to be just the thing. Loved it.

Lorraine and I drove home after that. Obviously pouring with rain as it has done constantly since October. 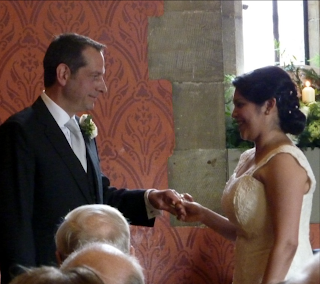 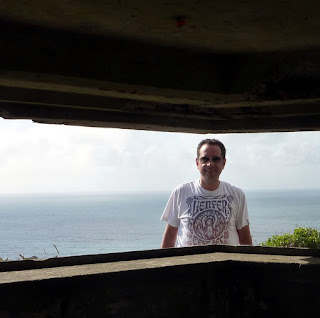 Kate said…
Oh, how happy they both were at their wedding. I can't stop crying.

Peter Kenny said…
Poor Katie. Yes their wedding was such a good day.