March 06, 2020
A sunny morning, thank goodness. Lorraine showed me the Mrs Bland of the Ordinary People's Party badge she had worn to school for World Book Day yesterday.

Trundled two suitcases full of books down to Balfour Road, which is the road parallel to Osborne Road, and went to Balfour School. Led into a big gym room they use for assemblies, and proceeded to do two assembly sessions with four classes each of nippers in them. My readings and talk went quite well, and I felt fairly calm, although it does feel a bit like going on stage every time. Sold a box and half of books there, and they will take some further orders, so I hope to sell a few more.

All done and home a little before noon. Sonia here early, and I had a chat with her, and pottered about doing a few bits and pieces before heading off with an empty case to Downs, where I met Emma and signed several more books for nippers in Downs Junior, as I had thanks to Dawn cleverly left a box of books there. Wheeled back a light case, feeling that I had managed to get through the week pretty successfully considering I had effectively been teaching hundreds of children, while not actually being a teacher.  Just as I was approaching my street, two boys from Balfour said hello to me in the street, and one told me that my story was brilliant. This was another lovely moment. Small steps, but little vindications that I am moving in the right direction.

Home and I discovered that my email had been hijacked and BT had frozen my email account because someone was doing bad things. Had to re-sign in, change my passwords and so on, which was a little tiresome. Spoke to Mum however, who suggested wearing latex gloves on trains among other things.

Counted the assorted fivers (as I was selling them at £5) and other notes and coins, including one euro. I had sold getting on for 80 books.

Lorraine came home and we slipped off to order a curry and had a fast beer in the Park View before strapping on the nosebag. Betty, Lorraine and I watched Masterchef and generally relaxed after a challenging week.

Below I had ten minutes before I began and, as you do, I took a snap of an empty hall. 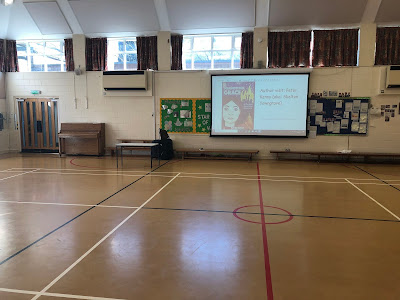