August 03, 2019
The tranquility of the morning interrupted. The pool man came at the crack of dawn, and somehow blew all the electricity in the house. Romy called Tina who came by and went off to make phone calls. Obviously we were not able to open the fridge. The day was an extremely hot one. Then two maids came in to clean the place, and then Romy walked into a closed glass door, fortunately not hurting herself, but cracking the glass. Maids aghast, wanting to press ice on her head and phoning Tina who came back to check Romy was okay.

Power restored, Lorraine wanted to stay at home, but Tobs, Romy and I drove off to Noto for a late breakfast. It was extremely hot, to the point of making me feel lethargic as we walked down the little streets and popped into the church with the expansive flight of stairs leading up to it.

We stopped at a cafe, and had coffee, and mineral water and I had an Italian variant of a cheese and ham toastie. Toby and Romy had a pistachio and mulberry granita respectively. Then back to Sipiu supermarket for more provisions.

By the time we reached home, it was extremely hot. We found Lorraine had been swimming lots, and was now on the sofa in the air-conditioned room reading. Hung out for a while, then L and I had a sleep, then a swim. Soon Toby made Fernet and Cokes which were splendid and tasted of myrrh, and Tina brought round some just cooked cannelloni which we ate, looking at geckos and bats dipping about around us. Not having a three course meal tonight was a little odd. We played some euchre, and listened to Corrine Bailey Rae, a Toby favourite. Due to some glitch in the Matrix, Toby and Romy won for the second day running.

Below stairs in Noto, one featuring Toby and Romy. The other featuring one of the heads you see everywhere in Sicily. It is the head of a moor, who was unfaithful and had it cut off by his lover, who used it to grow basil out of it on a balcony. You see it all the time on balconies. Some stained glass of the Virgin, a glimpse up from a courtyard, and a shot Toby took of the new moon from near the swimming pool. 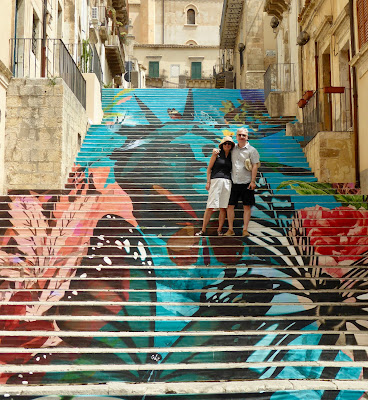 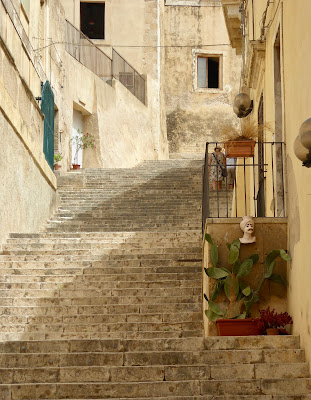 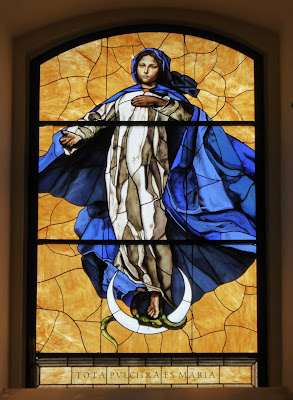 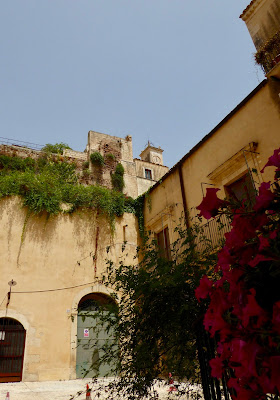 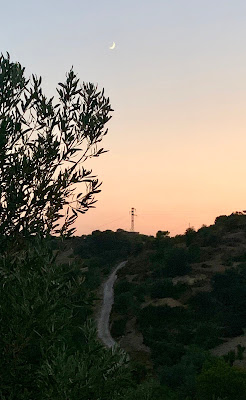