August 11, 2019
Up in our rented room in Catania, and we had to be out by 10:30. Trundled the cases down to the place we stopped at for a cheeky beer last night by a crossroads. Very hot of course. We had breakfast, me choosing a panini full of french fries and hotdogs. Tasty, of course, but morally reprehensible. A table nearby of English people being rude to the staff. We trundled through the lovely Piazza Duomo to a hateful bus station where we were hounded by unlicensed taxi drivers. We headed back to the Piazza where we found a taxi rank.

A high-speed exhibition of Italian driving dodging about the road and hooting people you were tailgating, we reached the airport. Our plane was delayed by hours again, and we spent the rest of the tedious day waiting for the plane which none of us felt was in any way guaranteed. A pretty lousy way to spend eight hours. EasyJet are rabble. But once we were flying, it was easy to prioritise the nice memories of our time there.

The flight eventually took off at sundown. It may have been the sheer relief of finally getting airborne, but I enjoyed the flight, and the views of Mt Etna I was able to see, as the plane took off in an easterly direction over the sea, then doubled back on itself to fly across the island.  In southern France, the plane passed great cumulonimbus clouds, flashing with lightning. The plane touched down in Blighty at 9:45. In the no rest for the wicked department, I turned on my phone in the plane, and there was a message from Pat wanting me to go up to London tomorrow morning for a briefing.

After collecting our bags, the car from the Summer Special car park, and dropping Beth and John in Hove, Lorraine and I arrived home after eleven. Fed the cats, Lorraine fed Clem and Caroline's cats next door, and dragged cases about and then, at around midnight fell exhaustedly into bed.

Below, last glimpses of mount Etna from the plane, dragging cases through Catania, a street of parasols, and my breakfast. 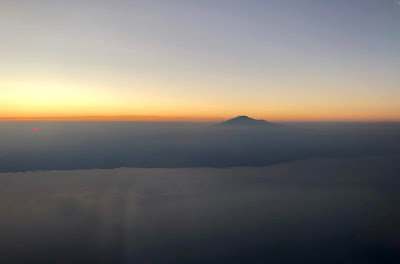 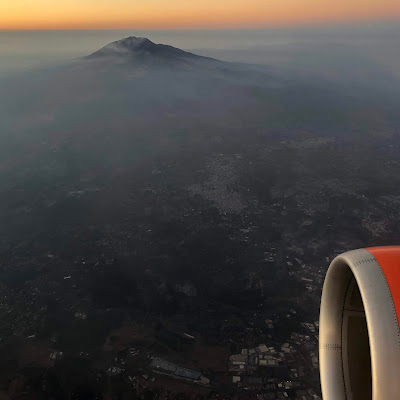 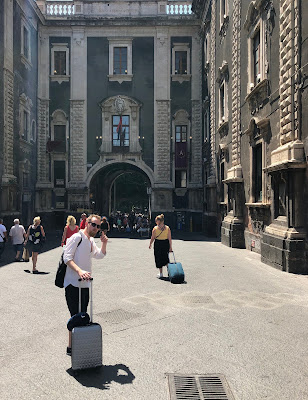 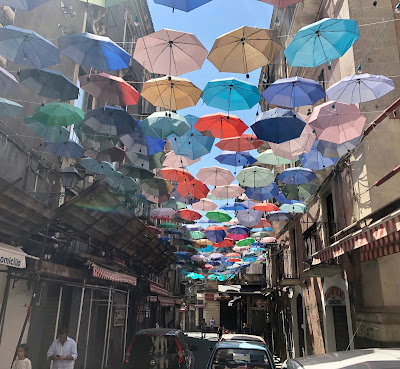 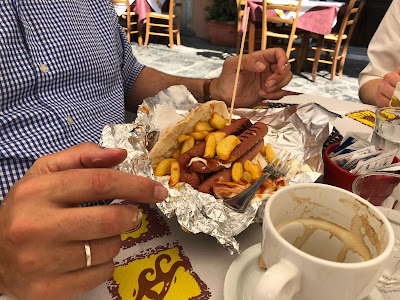