Beautiful Sicracusa and a boat trip

August 06, 2019
Off today to Siracusa, all piled into cars. Toby and Romy left sensibly early. Lorraine, navigated by me and google, got lost a few times in the harbour town. Eventually we found the car park, and threaded through the mazy lanes to the Doric Temple of Apollo, where we met Toby and Romy, and Agata our guide for the morning. She was an amazing Sicilian polyglot who spoke a list of languages, and was now acquiring Japanese for fun. She talked fondly of London, and the magic of going for a job interview in the snow. Later, she lived in Norway for a couple of years, drawn there by love.

She outlined the amazing historical richness of the town, a story with Ancient Greek origins epitomised by the ruin we stood beside, through Romans, and taking in arabs and Normans and the Spanish and others. She led us into a food market, the stalls piled with fruits and vegetables, spices and herbs, and fish stalls too. I noticed some had longnose, or garfish on slabs, as well as enormous swordfish. She told us about the tuna, which are hunted before they spawn and are full of goodness, tuna caught post spawning are of lesser quality. They used to be led into a labyrinth of nets, invented by the wily arabs, into a killing room. The barbarity of this bit, where the fishermen hacked at the tuna can only be imagined. Apparently once one tuna goes into the nets, the other will follow, so if you want to call someone stupid, you call them a tuna.

We stopped at a few stalls, buying sun dried tomatoes, and yellow plumb-like fruit and then had a plate of olives and bits of meat and a glass of white wine. From there we walked again through the maze of streets, another legacy of arab times, and went to an olive oil shop where the persuasive, and handsome proprietor gave us spoonfuls of olive oils. Some were surprisingly peppery. L and I bought some amazing balsamic vinegar, and pistachio paste. After we made our way to the church, with the town's rich history woven into it.

From there to a cafe restaurant to have granita and brioche, where Agata talked passionately about the importance of food to the continuance of Sicilian identity through its various occupations and rulers.

The afternoon was given over to a leisurely boat trip. All organised by Romy of course. We had a small boat, captained by Fabio and crewed by Virginia from France. This pootered about the natural harbour and we moored in a couple of places, and spent some time plunging into the refreshing sea. We were also served lots of food, much of it, we were told made by a woman in her nineties.

Eventually this sunny day was over, and we climbed out of the boat in the harbour and found our way back to the car park. We were all impressed by the city, teeming with inviting restaurants, and interesting streets. We felt we would like to return to it at some point. Lorraine was able to drive us home fairly easily despite the fact it was getting dark. We passed a fire raging in the hill on the way home, which was a bit scary. When we got home  Toby and Romy, had not arrived. I stood outside looking for their car, and could see the fire burning on a patch of the horizon. This was dealt with however, and did not spread.

It turns out Toby and Romy's car had been trapped in the carpark, unable to get out for half an hour, until Toby had driven over a barrier. There was a queue of people blocking the exit, and those trying to get out became infuriated. The design of the car park was all wrong.

Home anyhow, and Tina had left us some wonderful food, and we sat inside and helped ourselves, and then had a game of cards and a few drinks.

Below a fish stall with swordfish, me Beth and John on the boat, a fountain in Syracuse; a broken millionaire's swimming pool built over an rock arched, described as a tale of human stupidity by Virginia, fire in the hill snapped from the motorway. I will load more photos when I get back to blighty where the wifi is a bit stronger. 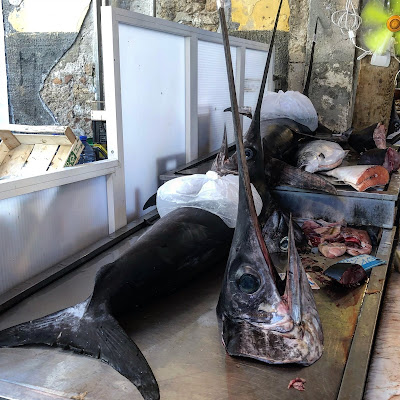 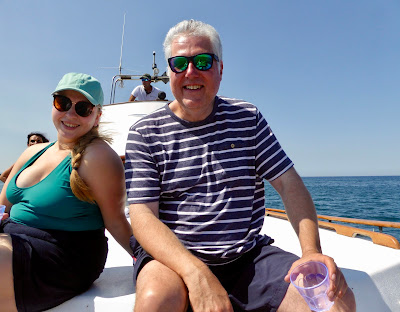 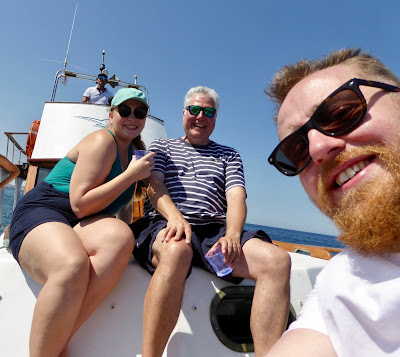 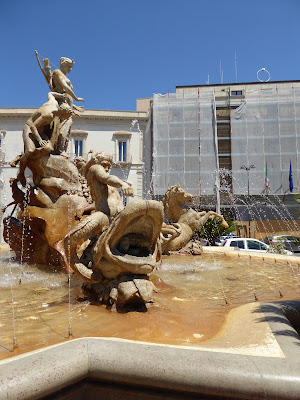 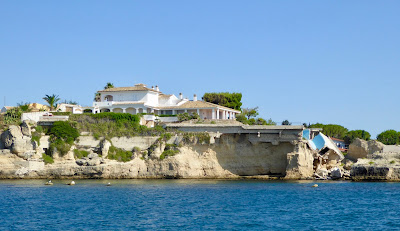 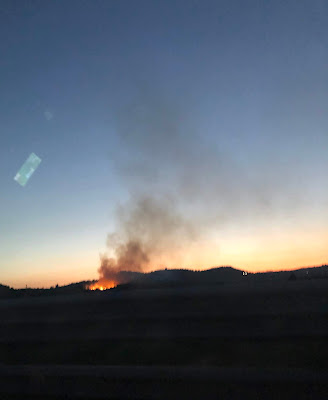