August 29, 2019
Up to work on the train, found that Matthew had loaded my new short story What You Look For on the Horla site. Into work. Workmen all around making loads of noise, had to leave my desk to find a quiet corner. Began to feel ill and feverish, but consulted my inner Lorraine, and simply popped out to buy paracetamol and have these with tea. A short walk in a nearby park, called Oakley Square Gardens, and then back into the agency to prepare to present the concepts to the MD and the wider team this afternoon, but feeling fairly confident after the meeting I had yesterday evening.

The meeting went sour. The creative director who had okayed the ideas yesterday began picking holes and claiming I had not done things he had asked of  me. His role, one I have done many times, was to support the creative presentation, not to try to humiliate his team and lie through his teeth. I  finished this meeting seething, feeling very hot and ill. The man, appeasingly after the meeting, said I could finish the job at home tomorrow.

Went home cross and increasingly unwell. As Lorraine was with her Mum and Dad to celebrate Pat's birthday (it was also Sam's birthday) I simply got fish and chips and slumped on the sofa.

Here I received a text from Richard Gibson, telling me that a mutual good friend of ours (I won't yet say who it is as I suspect relatives and others may not yet know) had committed suicide. Just really horrible, upsetting news.

Ten minutes walking in Oakley Square Gardens, an interlude from the madness. 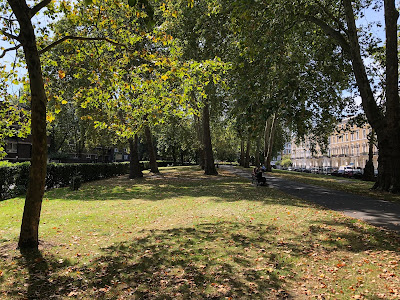 Lorraine Pat Richard Gibson Sam What You Look For