A room with a view

August 13, 2019
Up at six thirty, and off to Hampton. Lorraine had prepared a lovely lunch for me, which I discovered later I had left in the kitchen at home. The office at Preston Park closed, forcing me to buy a day return instead of a weekly pass. There was a ticket inspector on the train, and he told me to get it swapped at Clapham. At Clapham, they couldn't swap it, and to try Victoria. Obviously completely out of my way.

Bought a coffee and went to my platform. All trains delayed, then mine cancelled completely. The train only comes once every half an hour. The next one greatly delayed, so that I spent 75 minutes on the platform stressed, and becoming hideously late. Cancellations, we were told, due to 'congestion'. In my ignorance, I had thought the idea of trains was that it eliminated congestion. On the back of waiting for 27 hours for a plane over the weekend, this was really frustrating.

Work fine, once I got there. Walked off to Waitrose with Pat, and the French Bloke and Perky at lunchtime Talking to Perky (a crapaud but a lovely chap) about ghosts in the Channel Islands. Working downstairs in in the agency, which looks out at the river a yard or so away. In the next unit is an antipodean foghorn, some kind of artist in his sixties, who teaches art classes, to lots of mature ladies who clog up the carpark. Once the class is finished, he sits out the front, drinking a big glass of some spirit, and puffing aromatic cannabis. Quite a character.

Homeward journey fine, with little of any consequence to report. Very happy to get home, and Lorraine cooking wonderful, but calorie counted, food. Tom arrived this evening and chatted to us till I simply had to go to bed.

Below the office view. 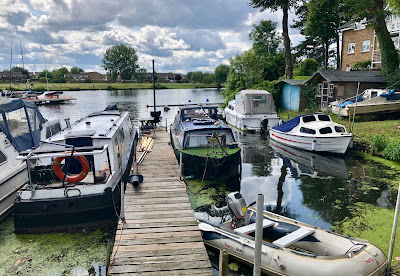