August 22, 2019
A call from Maureen saying that her sister Rose had died. Lorraine was out but called her back shortly. I met Rose only once, in Basingstoke four years ago. She introduced herself to me by saying 'hello sexy' and said she wanted to take me home. I liked her. Maureen naturally very sad.

Lorraine off to school early to deal with boiler people and IT people -- and then have her hair cut in the afternoon. I simply re-edited The Merger, and sent this off to The Short Fiction Journal. Fingers crossed. I have also been learning how to use the PaintBox digital design package, and have sent off for a beginner's graphics pad so that I can draw directly onto the screen. Contacted about a job for next week by the same people who blew me out for a two week stint when I was in Sicily, will find out tomorrow if I have it.

In the afternoon I walked to John and Beth's flat, to meet Lorraine who had sparkling new hair and was looking lovely. We went out to the sea, taking Bailey Bear, the dog belonging to Anna, Oskar and Klaudia who Beth was looking after for the day. When this dog wasn't trying to nose-probe groins and hump your legs or its toy monkey, it seemed to have a nice enough nature. We stopped by Innis's house and picked up Pippi the dog from a poorly Innis, and walked on Hove lawns with the two lamb-like dogs sprinting around and getting involved with other dogs. They were quite sweet, if you like dogs.

Sat in the sun on the bit of the beach that allows dogs, feeling the warmth on us, chatting to Beth and John, and watching the dogs snuffle about. Then off to the hospital to visit Rosie on the  tenth floor. She has been stuck in an isolation room for ten days. As we entered, we had to put little rubber gloves on and thin plastic aprons. Emily, her sister was there too, and we all had a nice chat. Rosie being incredibly brave and positive, and is clearly much liked by the staff there. We are all hoping she can be released back into the wild shortly.  She is having difficulty with unfindable or as Rosie says, 'petite' veins and they are having difficulty getting a line in.

Home eventually, and after supper we watched a documentary about a marine biologist who brought an octopus home for  a year to live with after his wife had left him. I enjoyed it.

Below bedogged on the beach. Two dogs, my knee and a bit of Beth. 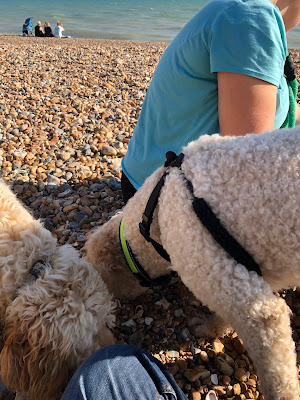