Lorraine and I off this morning in the rain to see Pat and Maureen. Traffic jams on the way, but we reached there. Took Pat and Maureen off to a local retail park, where Maureen looked at rugs to replace the one she said she was sick of the sight of, because Basil cat often brought its prey there, which left stains. A bit of struggle choosing the right ones, looking at quite a few. Children playing among the hanging rugs, underneath the signs that said do not let your children play under these hanging rugs. Maureen struggles to wear a facemask at the same time as her hearing aid, which makes shopping harder.

A grey rug secured, Pat and I sauntered back to the car. I opened the car stuffed in the rug, and then lost then briefly lost the keys on the back seat. Pat then urgently needed a wee, and we had some trouble finding a place, but eventually emergency was averted in Costa Cafe.

Home again, and Maureen talking knowledgeably about wool, double knits, four-plys and so on. Also mentioned again that she visits this blog -- which she calls the blob. Probably a better name for it. She cooked us a lovely dinner of beef stew and apple and blackberry crumble, and a brief chat with young Claudia and Derek in Finland, before we drove home. Preston Road flooding when we reached home, and we drove through some deep water before climbing uphill to home.

Below Pat and I popped into a little supermarket with these halloween characters. Also myself with day of the dead pattern on my facemask, given to me by Dexter, a young Skelton Yawngrave fan. 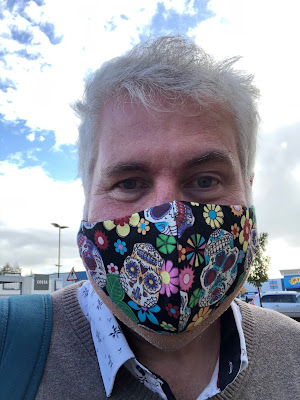 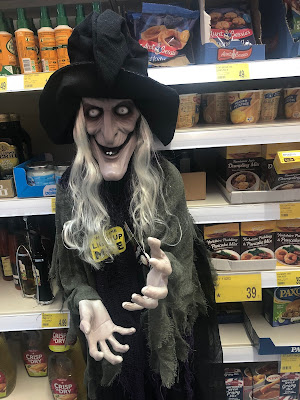 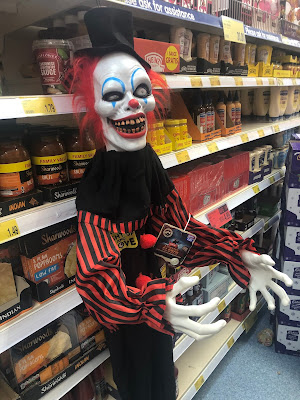