Have been pencilled in for more work next week, working at home for an agency up in town that I worked in with Keith for a few months a few years ago. If all goes through, I will be working with Keith again.

Otherwise all the usual things. Wrote some PK stuff, edited episode 2 of the podcast and went for another walk up and around the hill, pausing to look at the engine parts in the woods. Listening to a highly intelligent podcast by The Good Friends of Jackson Elias, a podcast about horror and gaming.  They had  two podcasts about current conspiracy theories, and I learned all about the madness that is QAnon, the far right conspiracy that is every kind of blended madness: democrats and celebrities, particularly the Clintons, are running a global Satanic pedophile ring, the Trump is fighting a battle against the deep state, children are being farmed for blood products, time travellers are going back and forth in time to speak to tell presidents when they are children that they will be presidents and so on... Turns out Trump is courting these lunatics, because they support him and they exist in their millions. (Later on at a candidates election Town Hall meetings, Trump was quizzed on his support for Q-Anon and he claimed to know nothing about them, except that they are hard on pedophiles.)

Home again, and a quick chat with Mum who was doing her hair at the time. Made an excellent chicken stew. Rick had called me late in the afternoon saying Ben would be around at his house helping him with a project and invited me around for a curry. I passed on the curry, as I had just started prepping food, but after I had eaten with Lorraine, I popped around for a couple of cans of beer and a long chat all at a distance from one another.

One minute and I was home again. In bed I finished reading the Steve Howe book. My god, talk about writing about everything except what was important. The death of Chris Squire a friend and band mate  on and off for at least 45 years is breezed over in an unheartfelt paragraph, turn the page and there is plenty of time for a paragraph detailing the fact he can't get his favourite blend of tea on the road in the US.

Below I like these engines in the woods, and the big field east of the golf course towards Moulscombe. 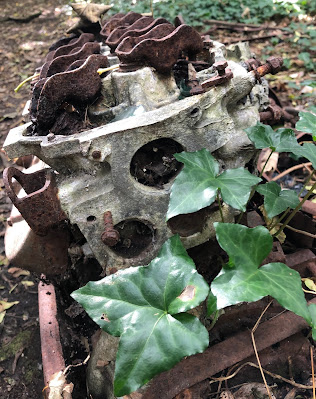 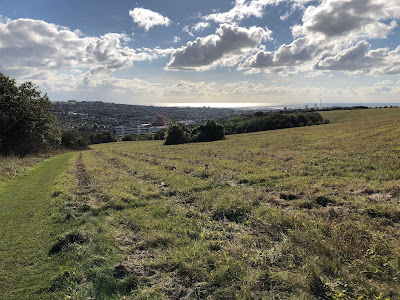