A pleasant morning, getting out of bed late and popping around the corner to score some Chewy Brown, which is now put aside for me on Saturday mornings. A small queue outside the shop. A woman said to me, 'a Guernsey jumper, that dates you'. To which I replied sniffily citing why my Guernsey jumper wasn't just a style choice. Another woman in the queue perked up and said that her parents had moved to Guernsey, St Martin's of course, and her brother lived there too, and she had been there for a couple of years. Made me miss the place even more.

Home and Dawn came by this morning, for some coffee and a bit of brownie that I had bought with the bread. Because it is my birthday on Monday, she gave me a book too,  Cast by Isabel Wilkerson, which seems fascinating. Lorraine showing Dawn how to present things on zoom, as Dawn is chairing meetings about green initiatives.  She told us about a date she had been on recently, when the man spoke for hours with only once asking her a question -- about what her daughter did. Broadcast only people are tiresome.

When Dawn left, Lorraine and I drove off to have a walk in the woods. A cool wind blowing over the Downs, but it was nice to walk in some woods at the top of the Stanmer Estate. Noticed lichen in white roundels on the trees, we walked through a thin stretch of woodland there that had an odd familiarity to Lorraine.

Both felt a little sleepy afterwards. I had a good chat with Mum, and later a cheeky doze. We both perked up when Anton came around this evening. He had made me one of his utterly delicious cheesecakes, and had used a stencil so that the word MATE stood out in the poppy seeds. When cooked, however, the M had morphed into an H. The A had gone a little funny too. But the idea of a Hate cake was a winner. Tasted marvellous too. He also brought three cards, and three excellent books: Berlin Finale, by Heinz Rein, Lucifer Unemployed by Aleksander Wat, and Naples '44 by Normal Lewis.

Spent the evening playing three handed euchre, eating a curry and washing it down with a few beers and listening to some tunes. Simple pleasures and a really good night.

Below, a cheesecake named HATE, and white lichen. 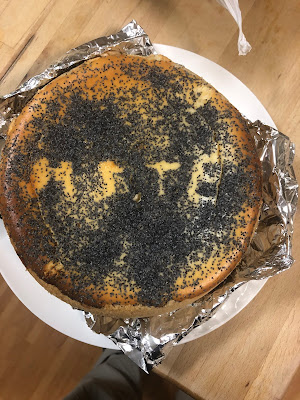 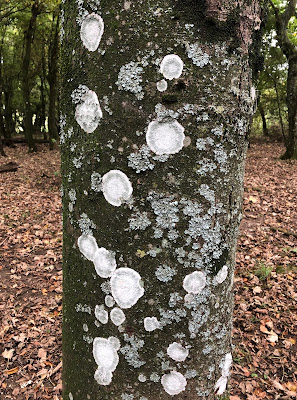 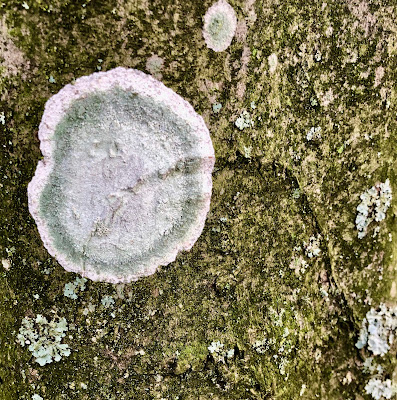