Another chat with Pat and produced some more ideas to round out the concepts Keith and I had come up with. Also painted the ceiling of the bathroom. Still a tad patchy, so will have to repeat yet again. Infernal thing. Also reworked a poem.

Otherwise walked up to Hollingbury, and a couple of turns around Blakers Park listening to lectures on Mesopotamia, which I am finding a little confusing but nevertheless absorbing. The history of that region seems less clear cut than Egypt.

John Lennon would have been 80 today. He was shot in 1980, when I was at University. I am not too affected by celebrity deaths as a rule, but his death and Bob Marley's death six months later, certainly registered with me. Lennon was certainly an interesting character. I think McCartney was more musical, but Lennon's creativity was more restless and interesting I think. They were great together.

Lorraine pleased to be home. I rustled up some grub and we had a pleasant evening, with Lorraine and I  unwinding to Death In Paradise.

Below a black and white photo to bring out the clouds that were gathering like a distant mountain range as I mooched today by the golf course. 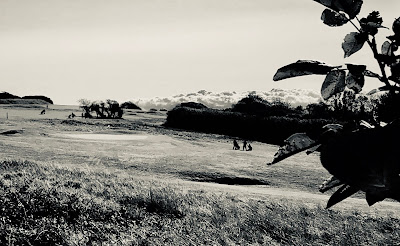