Dreadful nightmares. Up fairly early for a Saturday, and we drove off to Hove. We stopped at the small parade of shops on Richardson Road not far from Betty's place, and Lorraine went into a flower shop to buy a a sort of mid autumn Secret Santa pressie they were doing at work. I loitered outside, finding myself looking at Lion Mews, the name of which made me smile somewhat, ('mews' being a cat noise to me.) and even more when I discovered there was a Cat Grooming service in one of units.

I was still Pooterishly chuckling about cat grooming at Lion Mews when a cheery Betty hove to, and Lorraine came out of the shop and we wandered down to the seafront.  Betty was in good spirits, helped by her and James going nicely. She was off in the afternoon with James to see his mum and cousin.

You could really see the sky there, with occasional minutes of blue skied sunshine, when it grew surprisingly hot, and then bands of ominous cloud. Beautiful light. We ambled along and sat on the pebbles and had a takeaway coffee from one of the stands outside the refurbished Whitewater.

Then Lorraine and I ventured to Shoreham M&S where L brought a bra, and I selected some much needed underpants and a sweatshirt as gifts from Mum and Mas and Pat and Maureen. As I buy by underpants all at once, five or six pairs are falling apart at the same time. We ventured into the Asda next door too, and bought a few bits there. Felt weird to be shopping.

Then home, and a relaxed afternoon. Lorraine declared an interest in watching The Wire again, which we never got through completely. Started again at the first episode tonight. Lorraine cooked one of her curries with the special Persian rice.

Heard from Robin that she had tried to upload the podcast onto apple, and there was a problem.

Below Beth and Lorraine, and two people on paddleboards. 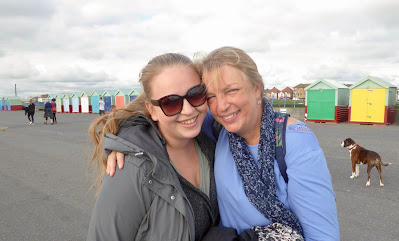 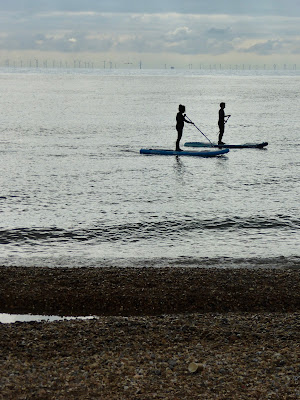