January 19, 2020
Lorraine and I now yearly ticket holders for the aquarium. As the yearly pass cost only £5 more than a single ticket, it seemed a bargain. I have visions of myself going there and sitting about off season.

We hopped on the bus and went there in good time today. I loved mooching about looking at the tanks of course, and Lorraine enjoyed herself too. There is a little cafe at the end of the Victorian arcade of tanks. The aquarium opened in 1872 and claims to be the oldest operating aquarium in the world. It has apparently the UK's largest collection of sharks and rays. Very happy to visit this  knowing that I will be able to return any time I feel like it.

Home again, and did Sunday things. Cooked some roast pork which was very nice. It was part of the collection of meats that Lorraine had bought before Christmas. We watched Call the midwife too, which is something of a Sunday ritual. I have grown to like this programme, which has a good heart which is a nice thing to be reminded of on Sunday night, and it reminds Lorraine of her former life as a ward sister.

Snapped these wolf fish all lying in a sociable pile at the bottom of the tank. They were great big things perhaps as long as a metre. 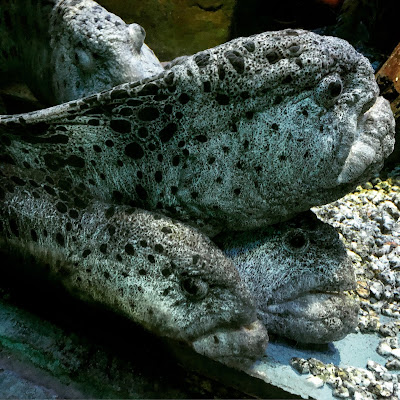