January 05, 2020
Decorations all packed away in the cardboard box marked Christmas for another year. After Lorraine and I took off its decorations, I dragged the tree down to the Christmas tree graveyard in Preston Park, following the trail of needles. Noticeably fewer this year than a couple of years ago. Our tree barely shed at all, and it seems few others had done so too. Must be the species on sale around these parts this year. Caught up with a bit of correspondence, and wrote to Sarah Barnsley who had sent me a note of congratulation about Sin Cycle, and a long overdue note to Joan in Deviation Road.

Otherwise a final day of mooching about. Seemed to spend an inordinate amount of time on laundry, tidying the decorations away and washing up. All cooked a roast chicken with many vegetables this evening, and ate it watching episodes of the brainiac quiz show Only Connect which Beth is very good at. Drank some wine, as it was Sunday night, and next week is a school week.

Began clipping Calliope's claws which seem to have got too long, as she is mostly an indoor cat now. Watched various vet's videos on YouTube, some of which suggested wrapping your pet in a towel etc. Calliope simply submitted to it without demur.

So, farewell to Christmas. Joan sent me this photo of Dick as Santa. He was born for the job.  Here he is with a bairn and two collies. Dick also sweated buckets in his suit. Must be an occupational hazard. 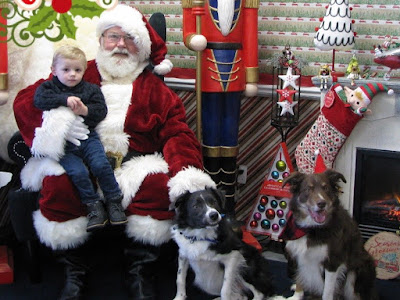