January 18, 2020
Lorraine and I chatting in bed this morning, having tea and breakfast and discussing how we need to make more of the weekends again now that Lorraine is more on top of her weekends and has not worked on Sundays as standard any more. We resolved to go to the Sea Life Centre aquarium down by the pier today, and took photos of ourself so we could pick up passes. By the time we got there however, we were too late, as in January the last admittance is at 3 o'clock.

Instead we went for a stroll on the pier, and were rewarded with the sight of murmurations of starlings as the sun began to slide towards setting.

From there we made our way, via a brief stop at the Evening Star where some Brighton footie fans were just whetting their post match whistles after a 1-1 draw with Aston Villa. We fell into conversation with one of them briefly before we set off up the hill for an evening with Anton and Ann and (intermittently) Oskar eating Anton's excellent pizzas.

Lovely time there as usual. Anton also added a sublime Polish cheesecake to his repertoire. Ate until popping point. Lorraine, who had been feeling tired all day, simply went home to bed, while Anton and I had an absolute bloody final or two in the Battle of Trafalgar, now reprieved after a local campaign from unwanted changes. I caught a cab home, as Lorraine had earlier, and fell into bed.

Below Lorraine and I at the end of the pier, the storm damaged groin by the pier, sunset with starlings (click on it to see the starlings better) and a jowly and less than flattering shot of me out-monstering  Frankenstein's monster. 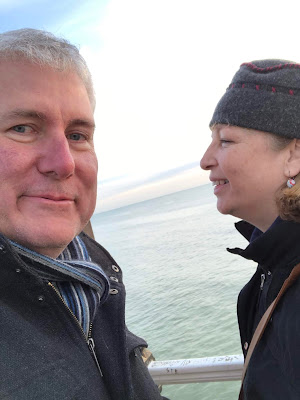 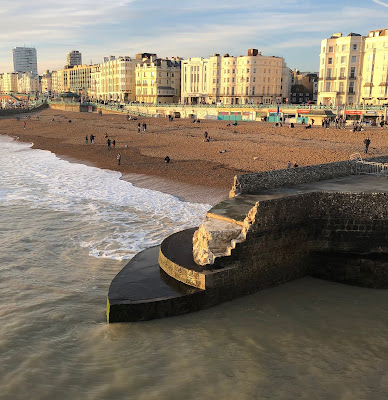 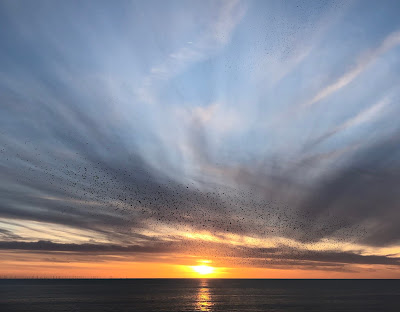 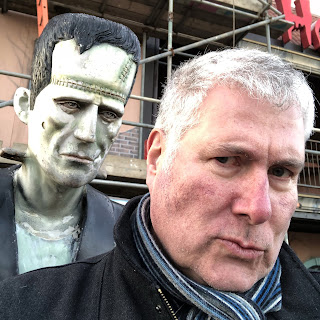