January 08, 2020
Up slightly later, and Beth drove Lorraine was off to the fracture clinic. Turns out the doctor she saw there was a parent of a child at school. Good news, however, the break was very clean and Lorraine now has a wrist support rather than a sling, and has been told she can do light things, such as a bit of typing, with the hand. Getting the cast off was good, and prevents L having to probe with pokey things under the plaster when she felt an itch.

Meanwhile at least another hour spent in a futile search for my Harry Potterish lost spectacles. I have now spent four or five entire hours ransacking the house from room to room in search of the bastard things, which I still believe must be in the house.

Made a bean jar today, but somehow it wasn't right. Slightly too much carrot, and an hour undercooked in its slow cooking process, nor did I add real chicken stock. Worst of all, as I had no fresh parsley, I experimented with coriander. It transpires that coriander in a bean jar is an abomination. It is just not a bean jar with coriander in it, but L gamely got it down and said it was nice.

When I wasn't going downstairs to annoy a working from home Lorraine, I spent most of the day preparing the MS of Magnificent Grace for print. A repetitive and nit picking day, interspersed with longueurs as the amended MS was uploaded and processed by Amazon. By evening and the wonders of tricknology a proof copy was on its way and should arrive this weekend. I need to have printed copies as I have three school visits lined up.

Foggy again up here in Kenny Towers, although when I went downhill to the gym it lessened somewhat. Took some snaps in the park, but a spot of water on the lens ruined most of the shots. Arrived at the gym I have been using in London Road and was denied access, as it wasn't my home designated gym (which is a bit further down the road). It had let me in for the last five months so I thought it would have grown resigned to the matter. I keyed in my number four times, and was sent four 'computer says no' texts and emails after. I tried a fifth time and gained entry, so I bite my thumb at the computer and am none the wiser. Did my usual workout, and was pretty tired by the end of it.

L and I watched the last Dracula episode tonight, a decent mini-series, quite camp and playful.

Below fog and greyness abounding in Preston Park, and a seagull playing in goal. 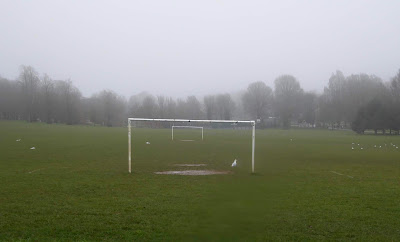