An interlude of philosophical tranquility

January 17, 2020
Up to The British Library today to meet Mum. We went to see the Buddhism exhibition there, notable incidentally for being the first time I have paid less for a show due to being 60. I was early but Mum was too, so that was great. A perfect little exhibition in many ways. Lots of lovely stuff to look at, Buddhist texts on palm leaves, gorgeous illustrations explaining the Buddha's life and the cosmology of Buddhism. There were also sounds playing too, with cicada and frogs and natural sounds of water. There was also a large bowl to strike at the end, which people did which rang out in a lovely way. It made Mum think of her dad Alex for a while, who was born in India, used to tell her about Buddhism and other religions.

I have always been well disposed towards Buddhism, reading quite a bit about it from being a teenager, and going to a retreat with Sophie. Mum and I enjoyed this quite a bit, you came away reminded of kindness, which can only be a good thing.We had been relaxed by an interlude of calm, and talked about how the exhibition was an oasis of calm and sanity in a hurly-burly world.

Then to The Somers Town Coffee House, which is a relaxed pub where we were rewarded with a seat. It took an hour for the food to arrive, which gave us plenty of time to chat over drinks of Hobgoblin and Cider. Food average but inexpensive.

Feeling a bit wan and weird on the way home. But I had become a dehydrated, and by the time I reached Brighton had drunk enough water to feel okay again. I walked home, and Lorraine and I headed for the gold sofa.

Below Mum striking a singing bowl, a long illustration of aspects of the Buddha's life, and the detail of a tiger. 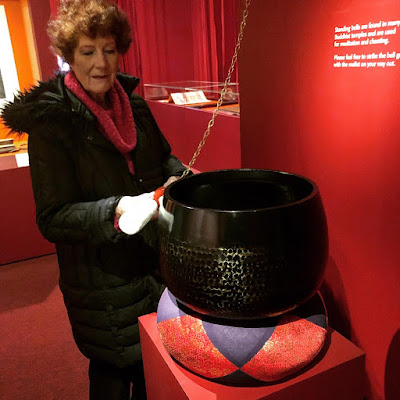 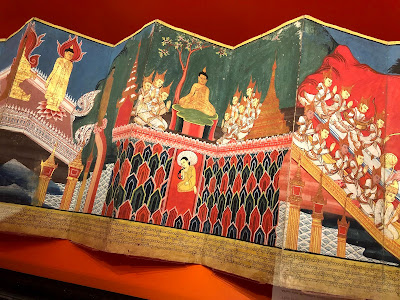 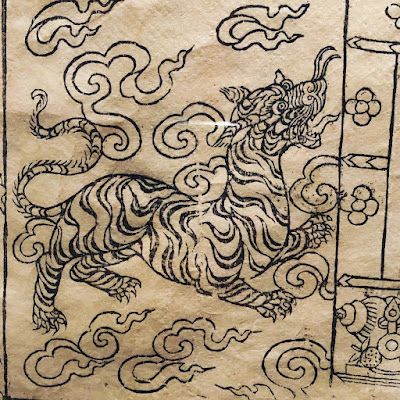