January 07, 2020
Up early, and getting Lorraine off to school. Two more hours searching for my Harry Potterish new glasses. Took to facebook to moan about their disappearance, Rosie suggested I should use strings to keep them on me. The majority of the day fiddling with the book layout for Magnificent Grace, which absorbed a good deal of patience.

Decided on a quick walk, and took my camera to photograph the fog that settled on Brighton in the afternoon, but its battery was flat. I took one snap on my phone of misty Blaker's Park.

The evening Lorraine, again home at six which is very early for her, we cabbed off to Anton's house where Anne was having a little gathering for her 80th. Anton unexpectedly had to work in London today. Anna there however to help, which was kind. Both bairns there too being excellent. Good to see Klaudia who we'd not seen over the festive period, now recovered from tonsillitis. Oskar now clearly taller than his sister. I expect he will be looking down on the area of concern soon.

Anne in good spirits and looking sparkly, with her pals Nina and Gerry there as well as Sam and Martin, who I'd not seen for a while. Sam said their son is now my size and quite the renaissance boy being an excellent sportsman, gifted at maths and sciences and interested in drama and music.

A cheery evening, and nice to catch up with everyone. I liked Gerry and Nina. Anne had known Nina from her days in Mexico, and Gerry is a more recent friend, who has a lively outspokenness about her.

Below Blaker's Park taking a bit of a gothic turn this afternoon, Oskar and Klaudia; Nina, Gerry and Anne. 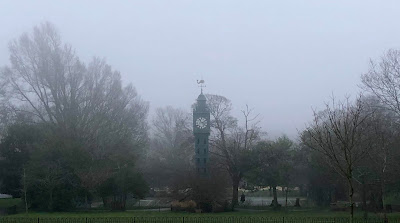 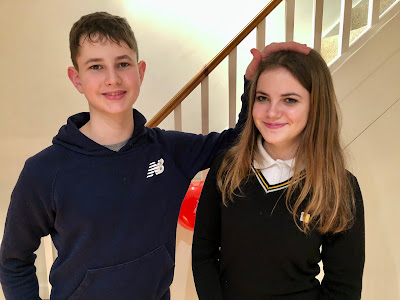 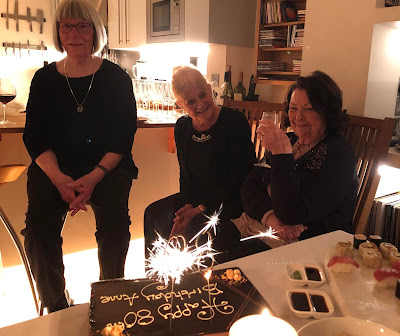