January 11, 2020
A leisurely start today, with breakfast in bed. Up and found that the Proof copy of the paperback of Magnificent Grace had arrived. Generally pretty pleased with this when I had a look. A couple of issues I will try to fix. Actually having the thing in your hand makes it seem very real.

A certain amount of pottering about the house with an increasingly handy Lorraine before we took ourselves out for the afternoon and off to the Duke of York's picture house to buy a cup of tea and see the new Sam Mendes film 1917.  As harrowing as you would expect a depiction of trench warfare to be, but brilliantly done and filmed to make it seem it was one continuous shot. Probably the best war film I have seen. Lorraine loved it too, although it was a tough watch, saddening and extremely moving.

Walked home talking about the moving, and then had a very relaxed evening on the gold sofa. 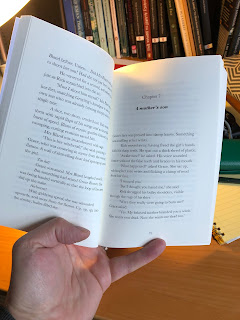