January 16, 2020
Found myself struggling for concentration this morning, so bearing Brian Eno's advice of 'When in doubt -- tidy up' simply did stuff instead zoomed about tidying, doing laundry, taking stuff to the post office. Then decided to get a fresh perspective and have a cup of coffee there. Suddenly began to get my head around the mental block I had, (after the yummy mummies had taken a screeching child away) eagerly opened my yellow notebook and snatched up my blue inked fountain pen only for it to run out after a dozen words. Bah. Simply went home though and got on with the day, rejuvenated. Amazing how many times doing something else is the answer.

Off this evening to The Needlewriters in Lewes. I caught the train at London Road, where I sought out Sarah by prearrangement in the last carriage. She congratulated me on the publication of Sin Cycle, and we discussing her editorship of the works of Mary Barnard hopefully to be published by SUNY.

We headed to the John Harvey Tavern, just a stone's throw from the Harvey's brewery, where among the usual suspects were Charlotte, Janet and Jeremy, who was hosting tonight.  I had a pint of Old and Bitter, a mix of old ale and bitter and known unfairly by bar staff as the Mother-in-Law. Tonight's readers were Emily Elgar a novelist, Ian McEwan a poet, and Umi Sinha a novelist, and there was much to enjoy in their readings. Liked it very much when Umi, who read us a bit from the novel she is just completing read out a somewhat overwrought line, and burst into laughter at it saying she would probably have to cut it. I was enjoying her reading very much, and this humility just makes you like people more.

My pals here always make me feel better about this bizarre path of being an obscure writer. Great to  enjoy a cathartic moan and lots of laughs. Home on the train with Sarah, and I legged up the hill from London Road to home sweet home and to find Lorraine still up in bed and reading.

Below upstairs at the JHT in Lewes, the audience listening to Emily Elgar. 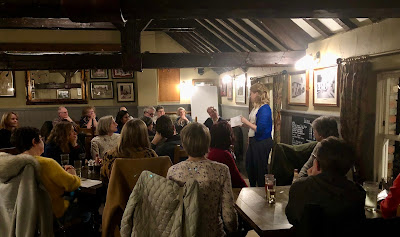