The Zen of commuting

February 06, 2020
I was thinking about Zen Buddhism on the way to Hampton this morning. The Shepperton train to Hampton was again cancelled but instead of raging about it, I was suddenly aware of the Buddhist notion of the gateless gate.  It crystallised as: the way to reach Hampton is not to travel to Hampton. Armed with this clarity, I was able to reach Hampton by travelling to Hampton Court station on the other side of the river, and simply walk. Obviously the Hampton Court train was delayed too, as the trains were passing through quite thick fog.  However, I was only slightly late to arrive.

A pleasant day today. Pat had brought in his Staffordshire terrier called Alice, it having had an operation recently removing something nasty from its face, and this thing barged happily about the office. At lunchtime I accompanied Pat as he walked about Hampton with Alice. At one point a charming young woman sitting on a bench fell on Alice, and chatted happily to Pat.  Afterwards I asked Pat how long he had known her, and he said that was the first time. The magic dogs have on some people. We sauntered across from the park to the pub locals call The Dip, aka the Railway Bell for lunch with the French Bloke and Joe. I had a fish finger sandwich. It came with a sprinkling of taco chips too. When a big bowl of actual chips arrived too as part of the £5 order I was impressed. The food the others had too was all in gargantuan proportions. We sat outside in a cold bit of the garden, despite it being a sunny day, because Alice hates other dogs and will growl and fight them and Pat, being from Dundee, avoids the sun like a vampire.

Actually, a really cheerful day. Left the office a little early, as I had completed everything for the day, and came happily home.

Coronoavirus update today. A third case in the UK, and uncomfortably enough the person who had it was in Brighton -- now in St Thomas's in London. He had been on holiday in Singapore.

Toby called when Lorraine and I had gone to bed early, for a chat.

Below a foggy Thames, with the white glow of the sun, and the gates into Hampton Court. 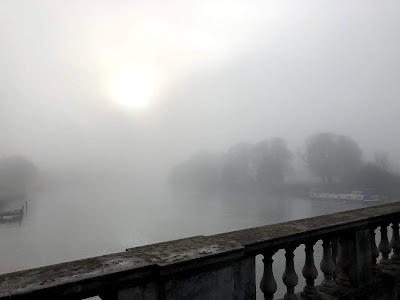 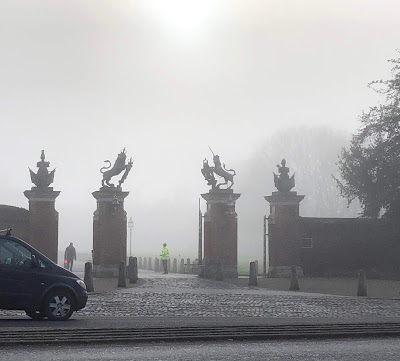