A drink with Anton in the rain

February 12, 2020
Lorraine working from home this afternoon, feeling a bit under par,  end of termish and in need of chocolate. Good to have her at home however.

Off in the evening with Anton for a drink. Anton's new philosophy is to walk such long distances between pubs so that your drink is calorie neutral. He met me at The Cleveland Arms. This is a pub that is very near to me, but the last time Anton and I went there was with Lorraine on a December 31st 2016.  It had a weird banjo-playing/Deliverance kind of atmosphere and we didn't tarry. Now three years later it feels very different.

Had a nice beer there and then set off on our travels. Had a half in the Open House, and then found a pub called The Park Crescent. This was a real find, tucked away in a street I had never been in. It was raining pretty heavily as we approached it. Inside there was good beer, a pleasant atmosphere and Al's Pies. We didn't eat them, but were deeply impressed with the menu. The pies looked exemplary as they were brought out and they were attractively priced. We vowed to return. Then we sampled a few more hostelries in the Hanover part of town, (aka Muesli Mountain), ending up at The Geese, as the rain hosed down. Walked home and ate lots of Ryvita.


A Pie Menu.... Loved the Hergé style illustration of Al. I saw him behind the bar. Looked just like him. 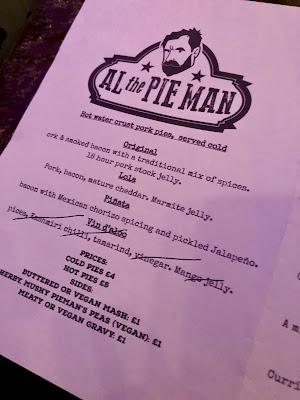 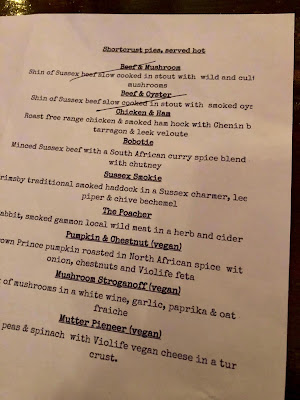