February 04, 2020
Devil trains part two today. Lorraine dropped me near the station early today, and I was able to catch an even earlier train from Brighton. Arrived at Clapham to find it in chaos. Obviously the all the Shepperton trains I catch to Hampton were cancelled, but so were those to Kingston. Spent almost an hour there before being able to catch a train in the right direction. Arrived with exactly the same lateness as yesterday, but with the earlier start that was well over three hours.

Work again fine. Pat there too today. Went to the pub at lunchtime with The FB, Pat, Keith and Joe, where we sat around the bar in the Jolly Coopers, and unlike yesteryear, I had a shandy and a fish finger sandwich, before repairing back to the agency. The FB bought a signed copy of Magnificent Grace from me which I signed for his boy Elijah.

Left with Pat and caught the train with him, and again was home easily. I had been briefed with lots of copy to write, so it was agreed I could work at home tomorrow, thankfully.

Nice to be at home, although feeling a bit tetchy not helped by standing in some cat sick just as I was about to eat. Had a glass of wine and chatted to Lorraine, who had held an assembly for Peter her former head of governors today, everything soon felt a good deal better.

Below, after twenty minutes at Clapham the train I take to Shepperton cancelled, and everything else delayed. I was able at last to catch a train that left Clapham at 9:30. There is something about the rapid deterioration in basic train services in the last few years that is symptomatic of the fate of England as a whole. 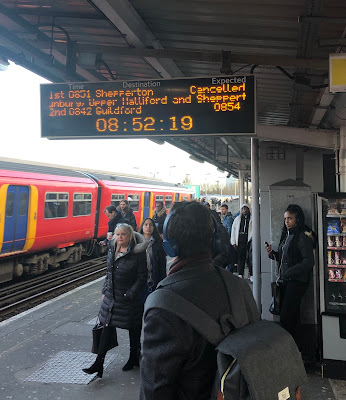