A poor time to be a hypochondriac

February 10, 2020
A terrible night's sleep for some reason. It was blowing a gale. Lorraine off to work however, and I got started with my fresh list for the week, written in blue in on yellow lined paper, as I always do. Feeling rather pleased at not having to commute.

It's a terrible time to be a hypochondriac in Brighton. I am alarmed by the UK's coronavirus cases, the majority of which are in the in Brighton due to a 'super-spreader', a bloke from Brighton who had been on holiday in Singapore, flew into france for some skiing, infected people there and then came home all without suspecting he was ill. A medical centre has been closed a bit north of here due to a locum, one of the spreader's mates, being infected. I saw something on social media only about someone being isolated in one of the campuses but this has not reached the news. If coronavirus breaks out in Brighton will they try to isolate the place Wuhan style. People seem fairly blasé at least in public about this, but if this breaks out in the UK with a 1% mortality rate, this could potentially see off over half a million people in the UK alone.

Did some work this morning on my various bits, and then walked across to Hove after lunch to see Helen and talk about the Centaur piece. I was a little early, giving me a chance to walk down to the sea. It was rough and the wind was still extremely strong. The seafront nearly deserted.

Helen has something very painfully wrong with her back, and is taking lots of codeine. She seemed strung out on it, weirdly floaty and disjointed so that was all a bit odd. Luckily she is seeing an osteopath tomorrow. She played me the penultimate scene and we discussed the final scene of the opera. 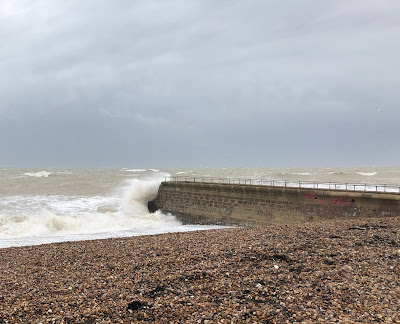 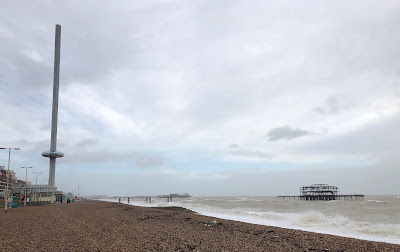 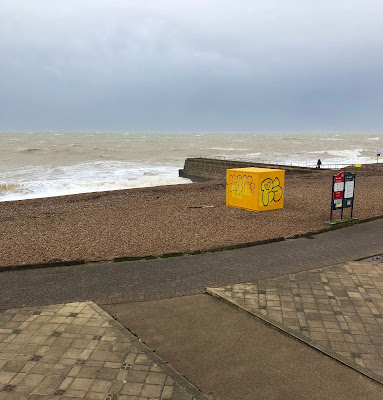