September 21, 2019
The Frogmore Papers arrived today, with my horror story in it The Dream Home. Lots of time wasted struggling to get a speaker working, trying to connect it to the wifi and so on. Galling when it has worked perfectly until recently.

A hot day. In afternoon Lorraine and I went into town and I collected my new glasses from Specsavers. One of the pairs looks a bit Harry Potterish. Then Lorraine bought me a much needed new pair of shoes as an early birthday present, and found a pair for herself that fitted the shoe rules. We passed a cafe that had little cannoli in it and we bought three, one of which was a lobster's tail.

A message from Val in Paris needing some urgent help.

Then we mooched down to the seaside and sat on a bench in Hove looking out to sea. It was high tide. The Labour Party Conference is being held in Brighton, and there was a gathering of Labour politicos listening to amplified speakers talking mainly about climate change, and how this was woven into the struggle of working people. One bit was talking about the ordinary working firemen who fought the blazes in California. Much of the rhetoric is similar to that used when I was an armchair Marxist in the early 80s. It was dated then, but I am Instinctively on their side though.

Then to a nearby pub The Southern Belle for a glass of stout with Lorraine, before we mooched up to meet Lynn and Malcolm in the Bottom's Rest for the various pleasures of their tray of thalis and lots of chats. Lynn making us laugh after I had talked about horror describing, with screams, about how she has scared herself looking at her own face in a mirror with a torch. Malcolm still doing cartoons around educational matters which are being published. Home on the bus after a very pleasant evening.

Below a largish fox in our back garden today. You can see it behind the chairs. 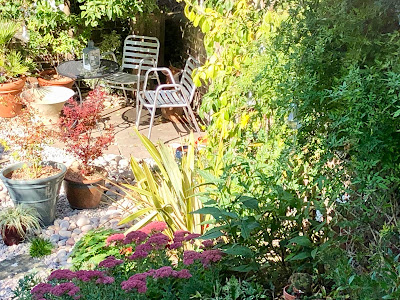