September 24, 2019
Horrid nightmares last night. Up early and had a shower. Lorraine off early to go to the gym.

I opened the front door into a deluge at 7:05 this morning. Ducked back in for my golfing umbrella and then walked down to Preston Park in diabolical horizontal rain, and a crack of thunder overhead as I was threading past tall trees holding my metal rod aloft. The gutters rushing like brisk mountain streams. I bought a cup of tea from The Daily Grind by the station, and the woman next to me said, 'this is like the end of days', which made me laugh. Everything in my rucksack soaked, luckily my laptop still worked. Even after reached Hampton, (slightly late due to train delays obvs.) my jeans weren't dry till about two o'clock in the afternoon. A pleasant enough day, although the client had moved all the goalposts, thus reducing the amount of work to be done.  Nice chat with Keith, and with Bouncy Max,  who was financial controlling for the day. She is in good form as ever. My lightning tracker going off at several times during the day.

Meanwhile the Supreme court ruled by a majority of 11-0 that the recent proroguing of parliament was illegal. Johnson blustering his way through it in New York with his chump chum Trump.

Managed to get home without a further drenching. A chat with Lorraine, then Ben came to collect me to go down to the Rose Hill for the 1920-30s Jazz night. A car pulled up by me in the street and I opened the door absent-mindedly and it was not Ben instead it was an alarmed middle aged woman, the more I apologised the more freaked out she became. Ben pulled up a minute later, with the news that he had breathed in lead fumes the day before and was breaking out in cold sores.

As ever a funny little scene there, mostly more mature people, many knowledgeable about Jazz some of women looking extremely slinky considering this is a pub. Some outbreaks of dancing too, with one self regarding couple sliding about showily but arrhythmically, while everyone else listened. Others got up to dance later, and these were studiously ignored by the showy dancers.

Musically the band is a bit odd.  They are led by a sometimes flat singer prone to entertaining scatting and acoustic guitar, a steady bassist and decent pianist, and a very talented, clarinettist and saxophone player called Ewan Bleach who comes down from London, and said it was his birthday tomorrow.

Ben and I laughing about the strange ecosystem in there. Another deluge starting just as we jumped in Ben's car, and I was safely delivered home and straight into bed.

Below Gorgeous Clapham Junction while waiting for a train. And a glipse of the Jazz, um, scene with dancers (not the showy ones). 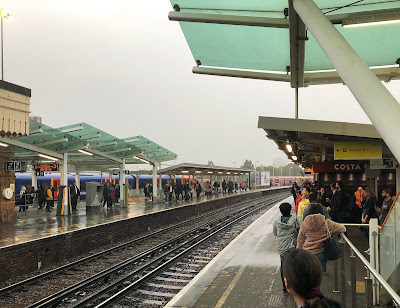 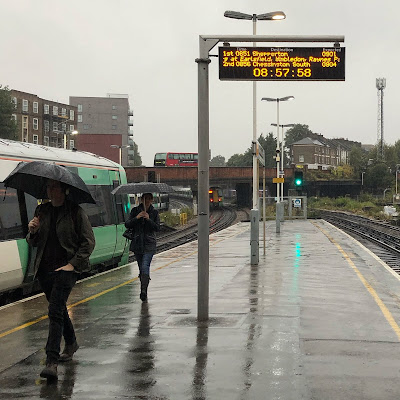 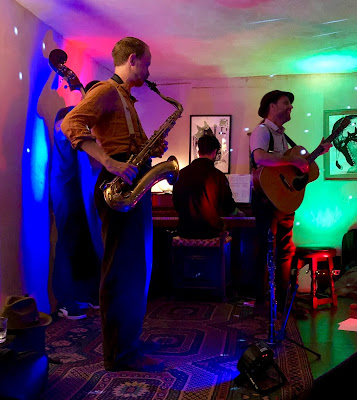 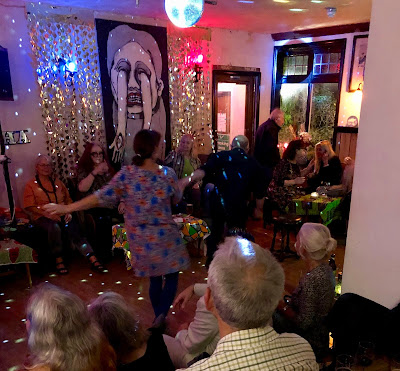