Red in beak and web

September 19, 2019
All up with the larks in Kenny Towers. I sauntered down to Preston Park, and tried to buy a season ticket with the nice lady in the ticket office insisted cost £165. Computer says no. I refused to buy it saying I had got it for much cheaper before and got a single instead. Tweeted Southern rail to ask what it should cost, and was told £105. Turns out I did not actually need a weekly ticket in the end once I learned I would be working at home on the project on Friday and Monday. But the fact that buying a simple weekly ticket at the right price is too much of an ask is quite damning.

To Hampton then, mercifully without further incident. Pat updating me on the latest goings on riverside with the swans and other waterbirds. Mallards drown each other apparently. It's all red in web and beak down there. Keith and I were briefed this morning. The agency were all off for their summer party in the afternoon. The French Bloke wandered in towards the end and asked me if I wanted a pint. I declined saying it was 12 noon and his agency were paying me to do work. In the afternoon Keith drove me in his wee MG back to his house to work, just around the corner from North Sheen station. Nice to catch up with Keith again, and we had some decent ideas.

In Brighton I went straight to Anton's house where he cooked his exemplary pizzas. I was starving and we drank some beer and generally shot the breeze about our lives and times. A final pop down to the Batty, before its transformation, and then Lorraine collected me to go home, having dropped Beth off somewhere earlier. A nice night.

Below a flower growing out of a repainted graffitied wall in a Twitten. 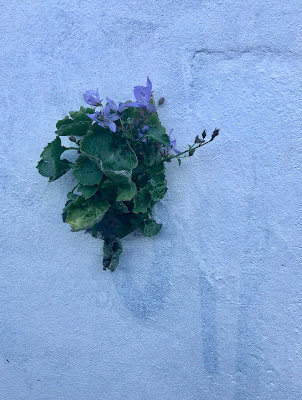