The comfort of vegetables

September 07, 2019
A slow Saturday. A lie in for me, although Lorraine got up and gave Beth a lift to work. Anton called and cancelled plans for a barbecue this afternoon as he had a horrible cold. Lorraine returned home and brought up in breakfast in bed. Marvellous I was feeling lethargic again, I took my temperature and found I had one. Both of us pretty tired.

We did zoom off to the different planet of Bolney's horticultural show, where we met Dawn. Looked at various flowers in pots and prizewinning cakes and so on, said hello to pleasant Bolney folks like Sue, and Sarah and Dan, and had good natter with Dawn, who is still coming to terms with her dad's death a year after her mum went. We told her about Glen too, who she had known. Still it was very good to see her, and he was my secret weapon in making the horticultural show even more fun.

Lorraine's school had entered a few veggies in the show, and the potatoes won first prize, and third prize in the longest runner bean category.

Home, and neither of us had much energy. Ate a lovely fish curry later, and opened a bottle of our cheap Sicilian wine. Nowhere as near as fine as the stuff we drank in Sicily, but still pleasantly potable. Watched a murdery Scandinoir series called Darkness: those who kill.

Below two creatures made out of vegetables by children, the owl a prizewinner. The little boy called Ollie mouth wide open in joy when he got a little cup, the sheep (?) won no prizes but makes me laugh every time I see it. The prize-winning school potatoes, and from Kenny Farm itself, our own back garden I picked this priapic tomato this afternoon. 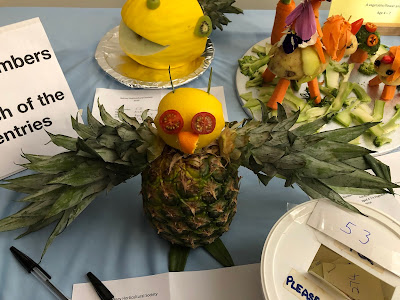 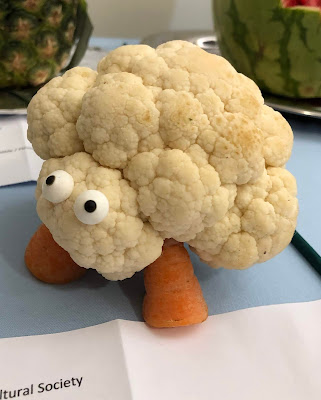 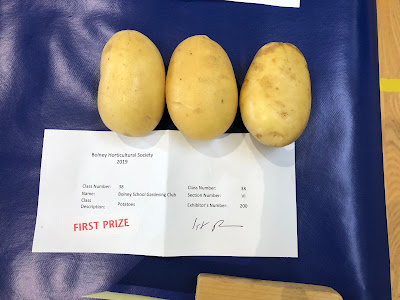 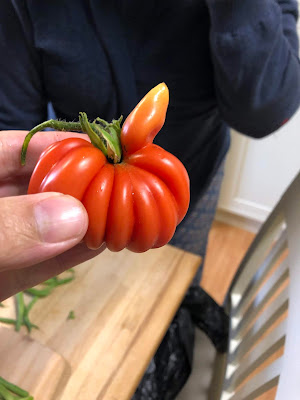