September 05, 2019
Up after not a terrible night, considering it was a strange bed. Had tea in bed, and then scrambled downstairs for a full English with Ken. The owner telling us she had a stroke last year, but gets up at five and clearly does lots herself. Two couples chatting to each other from different tables. Breakfast was fine, with lots of tea, although I had a weird outbreak of twitchiness. We went back to our rooms for a bit, and Lorraine and I did a plum village meditation, which made me feel excellent. I called Mum for a chat, and made an appointment for a massage, which I have been meaning to do for about a year.

Then we drove a couple of miles out of Hereford to Aunt Rose's house, where Pat and Maureen had been staying overnight. The house next door is where Maxine, Lorraine's cousin lives with her husband Simon and 14 year old twins. Met Stephen and his Sarah. Stephen, is Lorraine's cousin and Aunt Rose's son. All really nice people. The service was in the afternoon, and we were joined by lots of Lorraine's cousins, and Maureen's sister Betty, who delights in annoying Maureen apparently, and her brothers Wally, and Edwin. Wally remarkably chipper at 88 and saying the only time he has been in hospital was when he had his leg broken, a double fracture, playing football.

The service was short and sweet. I couldn't help noticing how the big family were all taking care of each other. Was lovely to see. Rose's family all upset of course. Maureen too of course, and her and her sister Betty sat next to each other in the service holding hands.

Then back to Rose's house, which was immaculately tidy, as was her way, and had a very tidy garden. The house was on a small hill and surrounded by countryside. You could see the Malverns and the Black Mountains of Wales from it. Several drinks, and Maureen and her brothers and sisters all chatting, and various cousins all mingling too. I enjoyed meeting several of them, especially Maxine and Stephen. I sat with Pat and Ken and we all grazed on a good buffet spread.

Lorraine got a call from Beth while we were there, and she would be staying with us tonight. Lorraine and I left at around six, and began the long journey home. A bit of a gruelling drive for Lorraine. The Satnav taking us up to the west midlands, before zooming home in pretty much a straight line. Home, and Beth was dropped off by her pal Annie, and we all had a long chat before bed.

Below a view from Auntie Rose's garden. Between the hills you can see the smudge of the Black Mountains on the horizon. 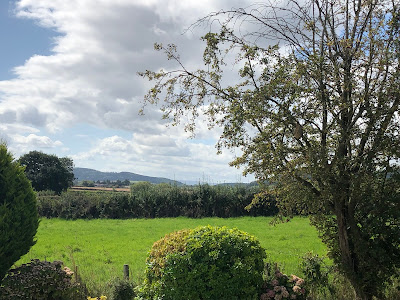