Lorraine ends with a song

January 03, 2014
A terrible night, where I developed a very rapid pulse, sweating with a temperature and a stomach like fire. Woke Lorraine up after several hours of this feeling rather panicked. Poor girl. She smoothed me down and eventually I got some fitful sleep. I can only think something I ate had not agreed with me at all. Still shaky and weak in the morning, but as the day pressed on I began to feel much improved.

A lake breakfast, and Hitomi brought little Hana around. Hana is very cute and two years old, and seemed a bit dubious about dogs.

followed by an early lunch at an eel restaurant, where we had our own private room. Hitomi brought little Hana, and there were also an elderly couple who had babysat Romy when she was little, and their daughter who had spent time in Canada. We all sat down to a healthy eel based snack. A deliciously eel inflected miso, a hearty bowl of rice layered on top with strips of cooked eel fillets and some salty salad pickles.

After this surprisingly filling food, Lorraine and I went for walk along by the water, seeing a dozen heron and white egret. We returned home to find an apparently empty house. Romy and Hiroko off to the onsen, and Toby secreted upstairs marking some school work. Lorraine did the impossible by densely packing an enormous amount into two cases.

Returning later to the kitchen we found an interesting scene, with Hiroko beginning to cook, and one of her old classmates massaging Toby who was sprawled face down by the katatsu. The old classmate had been waiting, she said, seven years to give Toby a massage, and apart from batting away the animals she did a very intense job. Romy taught Lorraine how to make Chinese dumplings. A Chinese student of Hiroko's called Reika, who works as a cook in the hospital, arrived and took over the frying and boiling of the dumplings to excellent effect. Eitero arrived home from work, running his own lift repair company, armed with bags of bar snacks, chocolate and beers. We all sat down, with the Chinese student, and the massaging school mate, who was very funny and talkative, and ate the dumplings with rice with lots of rice with vegetables, salad, sweet black beans, Korean pickles, pork in egg, and sampled the variety of beers that Eitero had brought. He is making it a mission to educate Toby, Lorraine and I in the ways of Japanese beers. Some of the dark beer was really nice although after the rigours of last night I was not too keen on drinking.

Then Toby and I remained home, and after chatting and watching some TV sloped off to an early night. Lorraine however went out with Hiroko, Romy, Eitero and Reika to a small karaoke bar, populated with older men who were singing. Lorraine sang a duet with Hiroko of two Carpenter's songs (the Carpenters being held in the highest esteem in Japan, as I noticed last time I visited) and also a Mumford &; Son's song. Lorraine said the best bit was when Romy and Hiroko sang together.

Below Hitomi and Hana; an eel based lunch; the eel restaurant owner who was a former student of Hiroko, and a playmate of Romy; egrets by the river; Eitaro, Toby and me at the table; two shots of those assembled for supper. 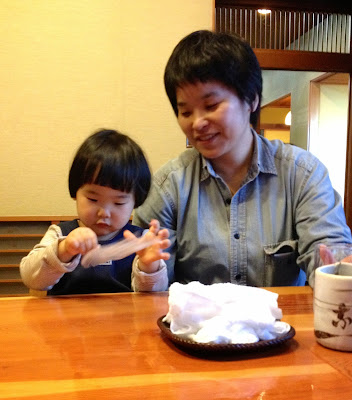 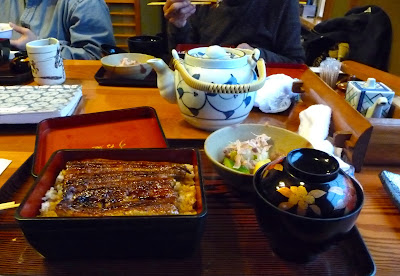 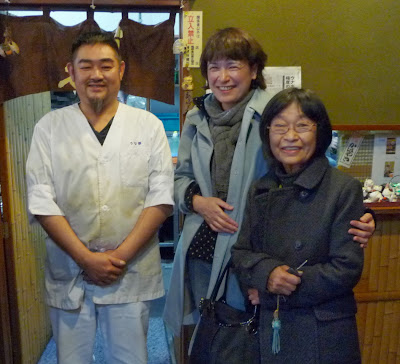 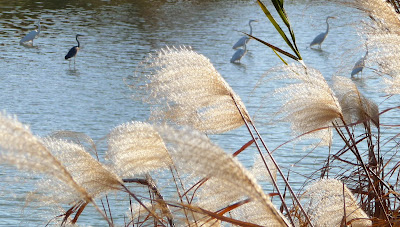 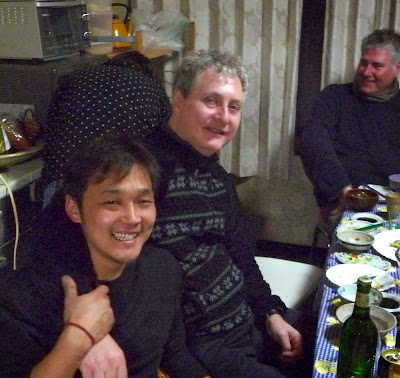 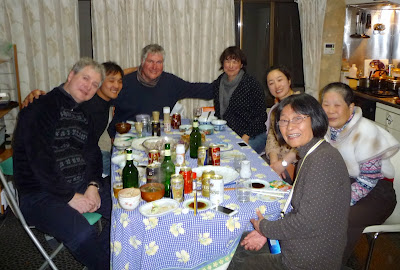 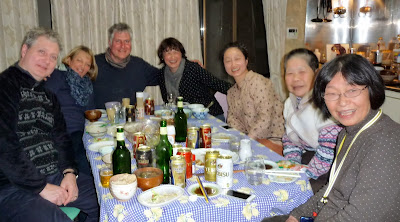