January 01, 2014
Up slightly shambolically first thing and all crammed into Eitaro's elegant large car with Romy and Hiroko folded neatly into the back. Chasing the sunrise we made it just in time to the beach as it was growing light. A handful of driftwood bonfires on the shore and we stood near one waiting for the sun to rise. It seemed to be a little later than everyone had expected but when it rose it was redder than I have ever seen the sun, it was a beautiful moment.

This witnessed the crowds melted away and we drove off with them, home for breakfast which included traditional rice cakes in a traditional soup. And a glass of good stiff sake. The TV in the corner of the room featured lots of people wearing comedy horse costumes as this is the year of the horse.

Then most of us went back to bed. I found I fell asleep for a good couple of hours and having been a bit groggy first thing felt considerably better.  A slow kind of day, which was welcome, getting to know Romy-chan, Little Romy, the bright green parrot which Hiroko inherited recently.  I've never spent much time with a parrot before but it seems remarkably intelligent and watchful. Sadly however, even when the cage door is left invitingly open Romy-chan will not leave its cage.

A walk with Toby and Romy this afternoon, after a delicious lunch, down to the sea where the pines are, reminding us all a little of Icart. Home again in a race against time, as we had strayed a bit further than we needed. Then Eitaro drove us all to a local temple, which we had to get to before sundown. I had visited this temple last time I came, with the idea of getting a fortune from a little machine, where you pop in a 100 yen coin and get a folded up piece of paper with your fortune on it. If it is a dud, you can tie it to a frame for the purpose, and buy another one. Lorraine and I got middling fortunes, and I chucked mine in a bin wishing that, like Toby, I hadn't done it. We shall make our own fortunes.

I wonder what the fortune was of the monk who scuffed into a post near the temple as we were leaving. New year's day demands a good deal of drinking in Japan, and our collective opinion was that the monk was drunk.

We stopped on the way home in a supermarket where I bought some beers to add to the impressive stock of booze in the house. Home again and Hiroko produced yet another magnificent feast, featuring lots of tempora vegetables and pork. The evening was accompanied with a good deal of booze, and Eitaro and I ended the night drinking a fine selection of Japanese boozes with Romy as our translator.  Towards the end Eitaro wanted to go out, but I declined this offer, just as well as he fell through the door shortly afterwards. He rallied magnificently though and one of his friends arrived, and I shortly after drunkenly sloped off to bed.

Below all off to see the sunrise; a couple of snaps from the evening's temple. 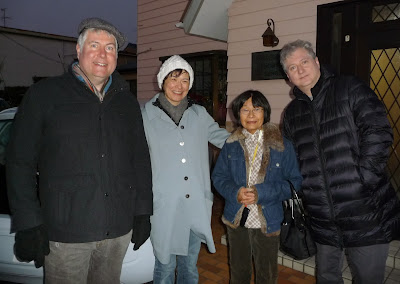 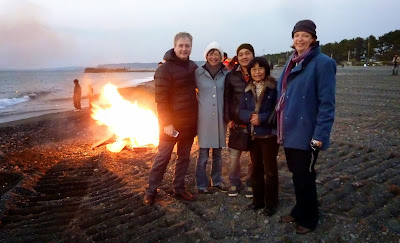 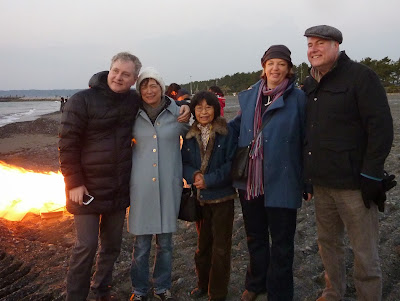 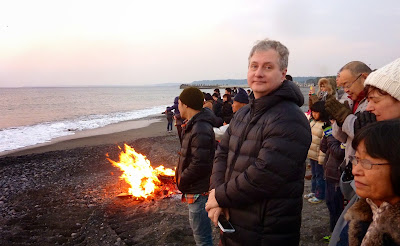 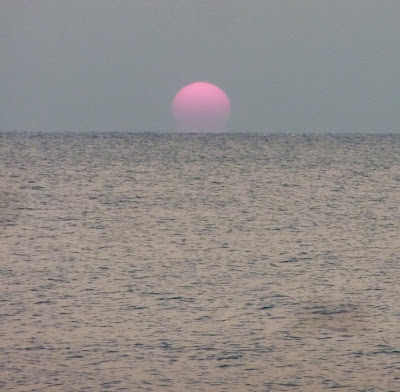 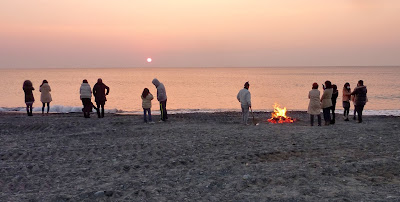 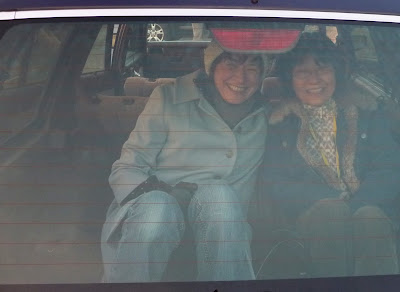 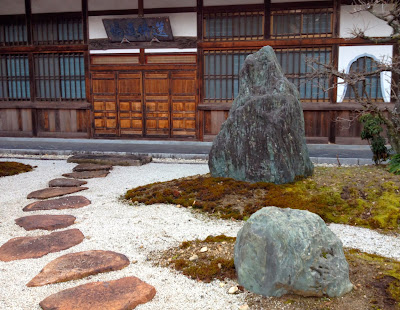 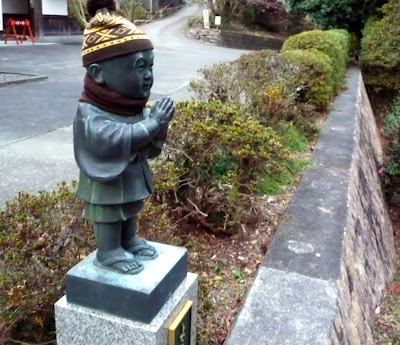