January 12, 2014
Mrs Kenny and I filled with a degree of steely resolve this morning, and we decided to take quite a few things to the recycling dump, and to a charity shop and generally sort out a corner of the house. First the triage of frowning at bits and wondering under what combination of circumstances, a meteorite strike, invasion of giant rats etc. would something remain useful. Useless things are dragged to the car.

I always feel guilty going to the dump. The very name dump gives it a Freudian association with defecation, as if your house were having a poo. You void your junk from the boot of the car, hoping people aren't looking to closely at what you are dropping off, and then speed away feeling curiously liberated. Explaining this to Lorraine, she suggested this isn't an entirely helpful way of thinking about it.

Home and companionably listening with Lorraine to the end of the 36 Views of Mount Fuji by Cathy N. Davidson audiobook.

In the evening, collected Anton and then made off to the Marina where we saw The Hobbit: the Desolation of Smaug. This was an enjoyable foray back into Middle Earth, and not a load of Bilbo Bobbins as I was fearing. I am not so attached to The Hobbit as I am to LoTR so the liberties taken with the plot and so on bother me less. Because the Hobbit is being stretched out over 3 movies there is still that sense that it could all have been done a lot quicker, and there is a good deal of padding, the visual wonder of the landscapes and the dragon and so on are marvellous and so a Tolkien fan like myself could watch it endlessly just for realisation of Tolkein's Middle Earth. Bilbo's discovery of Smaug's treasure hoard  was quite wonderful.

We all enjoyed it, although Anton worried about the flirtation between the Jackson-invented female elf character and one of the dwarves.

Rain down by the sea as we left the cinema. A nice day, and I'd really enjoyed my weekend.

Below Smaug peeping out of the gold... 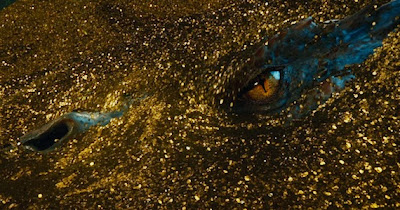