January 02, 2014
Hungover this morning and my lovely wife brought me a cup of tea and generally looked after me. Went off for a drive in Eitaro's great boat of a car to Shizuoka where we went to a mall, had a noodle soup lunch, which was rather restorative. Lorraine, Toby and my meal rather delayed as we did not press the little bell on the table to get service till Romy told us to. Generally mooched about in the mall, and Hiroko went off to have a massage, and Lorraine made friends with an elderly man and three elderly ladies. The man gave her a sweet for New Year, and told her where she could get some oishii delicious coffee for free.

Then a drive outside town to a pine lined wooden path, which has recently been designated a world heritage site. We all walked down this path and arrived at a pine grove Miho-no Matsubra pine forest by the seaside, which is associated with a legend of a Hagoromo. A fisherman finds a robe hanging on the branches of pine tree It belonged to a celestial lady, who needed it to return to heaven. After haggling she did a lovely dance in the moonlight for the fisherman before returning to heaven.  Mo-no Matsubra pine forest. Through these pines is a beach of what Lorraine said was volcanic sand with a view over the water to the Izu peninsular, walk down towards the water then you have the magical view of Mount Fuji, and pines too. A combination much loved here judging by the swarms of people who had come down to do what we were doing. Fuji-san an amazing sight.

Then all aboard Eitaro's car and back home, driving towards the new moon the thinnest slither I have ever seen it lying on its back, and driving through long tunnels under mountains. Home and off to a local sushi bar, which Hiroko says is the best in town. A delicious if slightly challenging meal. Started off with a whelk, and included tuna and white fish of amazing quality, salmon roe, huge prawns, as well as the crunchy snack of toasted prawn head and legs which Lorraine balked at. I was challenged by sea urchins, dusky orange dabs of evil. However the chef said his were fantastic and compelled me to have them. They were indeed much better than I'd had before but would not challenge for a place in my top 1000 foods. We also ate abalone, which is a close relative of Guernsey's orrmer and was rather tasty. A delicious soup with the legs of a spider crab sliding about in the bowl was amazing until I started thinking about giant spiders. My favourite was thin steak-like strips of this perfect tuna, which were set on fire for a few seconds, and tasted absolutely delicious.  A jolly evening, with a jolly host who prepared all the food before us as well as keeping up an entertaining stream of comedy banter. When we left he also gave Lorraine and I some chopstick holders, which was kind of him. He was a genuine entertainer.

Home again, with a driver come to take us home in Eitaro's car. Then for me and Lorraine an early night.

Below views of Mount Fuji; inside the sushi bar. 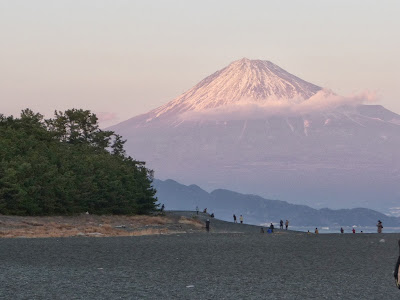 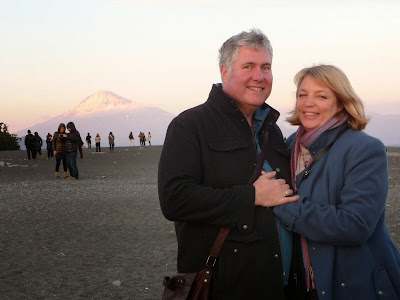 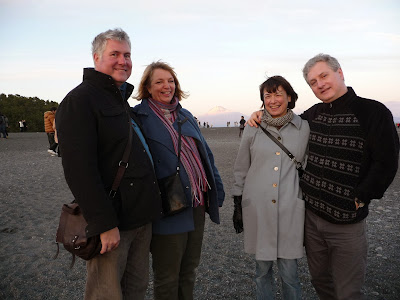 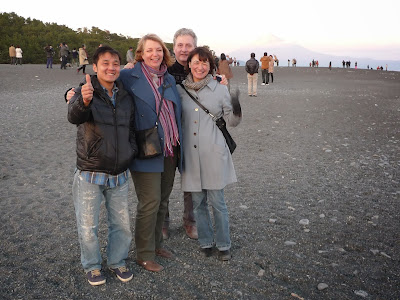 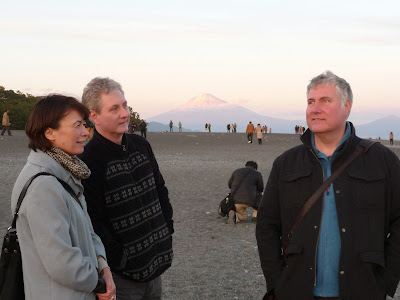 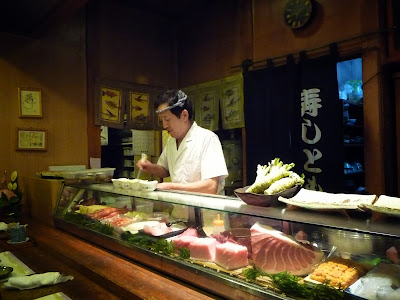 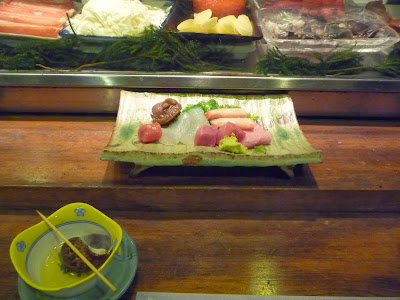 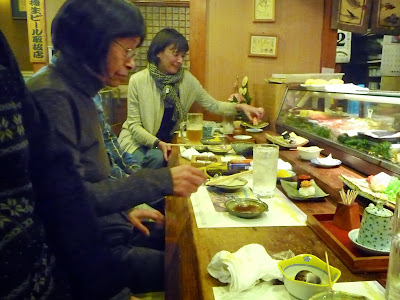 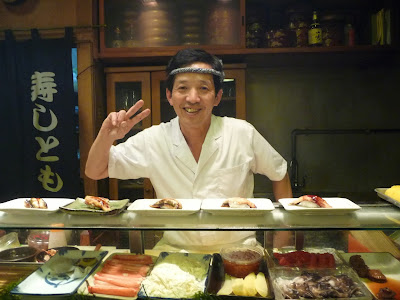