Journey on the edge of light

January 04, 2014
Up in the dark at 5:30 in Makinohara. Having packed discovered that Toby and Romy were up, Hiroko had cooked us breakfast and made tea, Hitome had arrived thinking she was going to drive us to the station. Bade a sleepy but fond farewell to Hiroko, who had been wonderfully hospitable as usual and to Hitome, who Lorraine invited to stay with us in Brighton. And of course Toby who it is always hard to say goodbye to.

We were driven to Kakegawa station by Eitero, who seems to have become as fond of us as we have of him. He returned last night laden with gifts for example. He is mad for cars and we saw him driving two of them. He has a curious hunched stance when driving, and frequently opts for the no hands steering wheel technique. This morning he showed us clips of Lorraine, Romy and Hiroko singing last night in the karaoke bar. Lorraine cringing at her rendition of a Mumford & Sons tune.

Kakegawa statino smelled strangely of drains, but Romy helped us with the tickets, and Eitaro brought us some hot tea and it was time to say goodbye. More fond farewells here.

Lorraine broke our journey down to stages. The car ride was stage one, stage two the Shinkansen boofing to Shinagawa providing us with more amazing views of Fuji. Funny how on the train, even the Japanese who must see Fuji all the time make time to look at it.  This accomplished with no trouble we made an easy change to the Narita Express which takes you to the airport. This journey, stage 3, achieved with no trouble other than me forgetting where I had stored the cases.

Getting through Narita we considered stage four. This was a difficult stage as when we checked in we were told that we couldn't sit next to each other and was this all right? Lorraine, bless her said no it wasn't alright and went into a length description of what a neurotic flyer I was, I chimed in by saying that I was very disappointed, that this was our honeymoon and so on. Eventually they rearranged the seats for us just before we boarded. We'd paid extra for premium economy and there were lots of people flying singly and it should never have been a problem. Made for a stressful hour or so though.

The plane flew so far north that the sun was merely a ruby red glow in the southern horizon for much of the journey, despite the flight being during the day.

We had seats together in the middle row of the plane, so this stage of the journey wasn't ideal as I was unable to stare out of the window to keep the plane straight and level through sheer willpower and assess the weather conditions, something for which I have developed an eagle eye for over the years.

Instead I watched movies, including About Time, which was inoffensive plane viewing with some charm the latest Richard Curtis movie, then I did what I rarely did watch films with violence and explosions in them while flying. I watched Elysium and Pacific Rim. Both fine in their own SF action way, but lost most of their virtue by being on a small screen. I opted to take some tranquillisers en route and this proved to be a good plan as we hit quite a bit of turbulence in the last three hours as we approached home probably caused by the bad storms that hit the UK in the last few days. After circling London several times we finally landed at Heathrow and stage five of our journey was over.

Getting through Heathrow fairly painless, and we were lucky enough to run to catch a National Coach to Brighton. This coach shambolic however. The storage was stuffed to capacity and highly disorganised,  and it was only by watching with eagle eyes that I noticed our cases about to be left on the pavement at the next Heathrow terminal we stopped at and I had to run out of the coach to save them, which compelled me then to neurotically monitor each subsequent stop. Finally we arrived at Preston Park and Betty appeared at the stop. I had to personally crawl into the bowels of the coach to retrieve our cases. Home at last. Really good to see Betty and tell her about some of our adventures.

I had a shower and, slightly surreally, we three made off for the Shahi for a comforting curry with Betty who hadn't eaten all day. Lorraine and I quite bright and awake. Suddenly towards the end of the meal,  I was so overcome I could have slept on the table. Home and straight to bed.

Below a view of Fuji-san from inside the shinkansen. 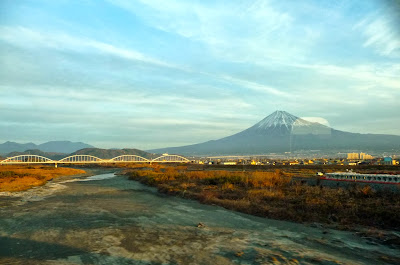