January 10, 2014
Up early and working, before going to the gym.  Really pleased that Friday had arrived principally because it meant Lorraine wouldn't be driving around the county for hours with jet lag.

Contact today from Kev Holmes, an old University pal.  By coincidence one of his children just started Warwick this term, doing the same computer science course that Kev had done.

In the afternoon, off to drink tea and eat tasty Japanese cookies given me by Hitomi with Janet and Ken. Both not feeling in the most robust of health, and Janet keen to get her medications properly balanced after her stents were put in. They were interested in hearing about Japan, and we had lots of good chats with them, including regulation beardy kisses from Ken on the way out.

Back home to find Lorraine finished for the week, and having a light snooze.

In the evening off to The Sussex Yeoman. Here Lorraine and I met Betty, Anton, Rosie and Cath and for drinks and some good pub grub. Matt came by later, too. Very good to see these friends, and actually have a drink in a pub, which we hadn't done for some weeks. Anton now skateboarding, with a skateboard that reaches his chin, which he is doing to keep Oskar company. Rosie telling me about her new thing which is hot yoga. Apparently the heat relaxes your muscles and helps you do more. Betty said she did the reading of a poem exercise this week, and she did one of mine which was quite flattering. Apparently people asked her about the poem, and she said it was written by her stepfather, which was all rather touching. Matt had a pretty emotionally gruelling trip home by the sound of it. He also showed me selfies he had taken with Calliope on his phone.

Betty, Lorraine and I cabbed home, and I watched some darts on TV, which as far as viewing pleasure is concerned is second only to a good game of football. You can keep your Wimbledon's I prefer to see fat blokes playing darts. Having expressed these opinions it was soon time for bed.

Below Matt with Calliope whose loyalty to me is clearly paper thin. 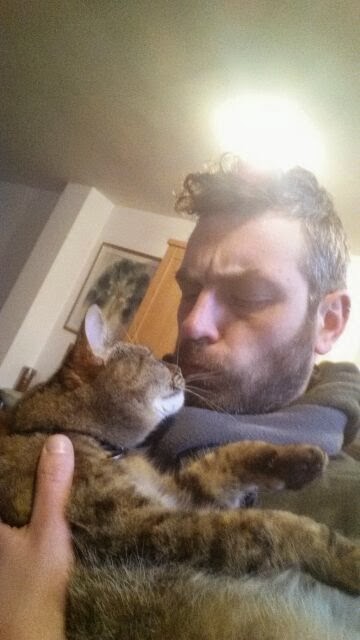