Venus and other things

Rain and greyness today, and getting a bit nippy.

A stressed and tired Lorraine working from home this morning, Dawn came by to put some sealant underneath the doors in our bedroom. Carl phoned, telling me about Ellie starting her new business selling prints of her music star pencil drawings. Anton called, saying his meeting had been hideous, several people very far apart in a room all wearing facemasks, making it difficult to hear anyone. Lorraine back into work. I spent the much of the morning working on the branding for the new podcast, none of which was liked by Robin. Then worked on a new scene in Invisible Grace. A short walk, then painted the second coat on the bathroom walls, and did some more writing.

Lorraine back home and after being fed with salmon and stir fry went straight into a virtual governors meeting. Among other discussions,  it was been agreed that I will reprise my Santa role this year, but just calling out to them from a distance, and with my mask on -- peak 2020. I will miss the conversations about the delights of Brussels sprouts and so on.

I read another essay by Hélène Cixous, and listened to some plainsong, and watched a Sky At Night episode about the phosphene in the clouds of Venus, which according to Prof Jane Greaves who led the team may be a sign of life. I suppose it is understandable that people think life could only exist if it resembles Earth conditions. It's like how aliens in SF are usually humanoid. But in theory life may have developed in completely different ways, out of different substances. We simply don't know.

Lorraine down for an episode of Death in Paradise, and soon needing to turn in afterwards after a cheeky gin and tonic. I had a lager too. Not my favourite day today. Minuscule progress out of all proportion to effort.

Lead from my chums in Paddington seems to have evaporated.

A shot recently put on facebook from my university pal Kev Holmes drinking what appears to be a lunchtime beer when the fringes of Warwick university were all fields etc. A few things like this surfacing recently.

L to Right, Kev, me, Simon  and John, which Kev says was April 1980. Have seen Kev recently, and not seen Simon for many years, although he was one of my besties for a couple of decades. John, who was always known as John John or J.J. for reasons lost to time I have not seen since University. Wearing keys on the outside of my jeans. John doing it too. All wrong. Keeping in touch with people would have been much easier if we all had facebook etc. 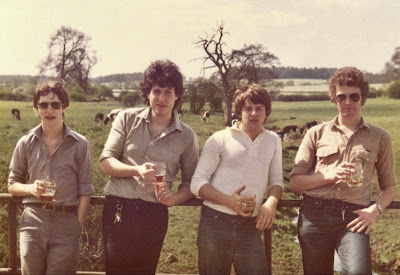