September 06, 2020
Lorraine getting calls about school, and the pressure for her is on. All I can do is be as supportive as possible. One way today was by proposing a walk at the top of Stanmer woods, which was particularly nice, as there is already (in this mad year) a touch of autumn about the leaves.  We sat in a field looking at the rolling Downs, and the blue sea on the horizon and at times could barely see a soul, and although we drove up to the woods, this is still walking distance from our front door. Living near the edge of town is something I am beginning to treasure.

Later in the afternoon, Lorraine did some school work, and I did bits of my stuff, in preparation for meeting Robin (virtually) tomorrow.

On my prompting too, Lorraine cooked an Anton's pears, apple and blackberry crumble, which was utterly fine. We also ate a Kenny farm large tomato for breakfast, and some Kenny farm mini potatoes for dinner. These were particularly tasty. We will be continuing our potato experiment next year I think.  Lorraine wanting another Death in Paradise tonight.

Meanwhile clouds are gathering, reading about a significant uptick in virus infections, just as the Government is proposing everyone should return to their offices and go back to school. It is as if they are doing everything they can to promote a second wave. Also on the disaster that is Brexit, they are now saying a no-deal Brexit would be a good thing. I despair at the prospects for this country.

Below, open fields and big skies just a walk away. 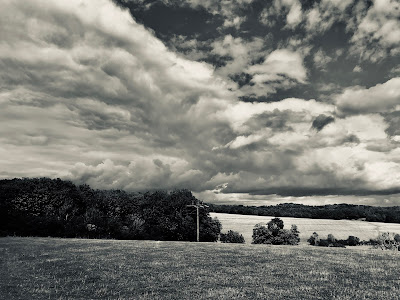