September 08, 2020
Drawbridge up. Finalising the words for the last scene of the Centaur project ready to send to Helen, and then editing a bit of podcast chat. And a note from Val with a smidge of branding work to do tomorrow.

Watching a series on Netflix called Away which, while rather slow, at least looks good, and has Hilary Swank, who I don't think I've seen in anything, but is one of those actors blessed with a watchable face.

Having to control my apprehension about the new wave of Covid.  I detest this government, but I can appreciate that this is a fiendish situation to manage -- having to factor in the economic damage, the unemployment, the loss of learning for children and so on -- and a self-inflicted no-deal Brexit.
What would also help immensely is if Trump is voted out in November, turning of the slimy tide of moronic populism that is lapping at our ankles here too.

What helps is a couple of walks to get me up to my 10k paces, listening to The Other Side of History, while walking on the hill fort. It is currently describing everyday life in the Roman empire. Rome very smelly apparently. Lots of ordinary people lived in Insulae, which were four storey blocks, with the rooms progressively smaller and cheaper as you climbed up the stairwell. Below an image of one I grabbed off the internet. Doesn't look too bad from the outside really. I've lived in worse, although the absence of plumbing and toilets and so on would have been vile. 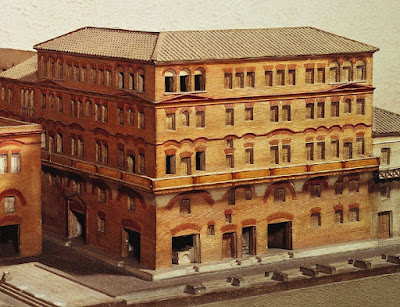 Centaur project Insulae The Other Side of History