Talking to Robin about podcasts

Up early as ever with Lorraine. A productive day, working on the plot outline of the second Grace book, among other bits.

Off at three to meet Robin the Preston Park Tavern. Meeting in the middle of the afternoon, meant that we could get a beer from a woman behind a screen, and then walked out into the garden, where we were completely alone. The booths were hung with plastic sheets to separate each one from another.

We had a big podcast catch up, much better face to face that online, and discussed a bazillion things that needed discussing, and did a little recording -- not to mention quite a bit of general goss. Robin cross with the fact that people are allowing fear to dominate their lives, which was a bit weird as I reached that same epiphany at the weekend. Of course do everything to protect yourself and other people, but don't let fear ruin your remaining days on the planet. The podcast itself feels really purposeful, and good to be working with her again.

Walked her back towards London Road, before doubling back through Blakers Park and home. Lorraine getting through another day. Watched another episode of Des, which is about Dennis Nilsen the mass murderer. He lived in Cricklewood at the same time I was dating my teenage girlfriend Lorna, who lived a short distance from him. David Tennant is brilliant as the frighteningly unremarkable killer.

Below, the low sun shining along Preston Drove. 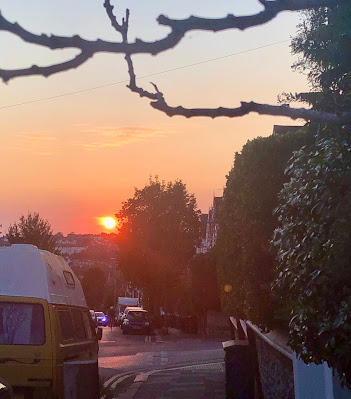