Another night of  frustration dreams.  Although quite chirpy once up. Having decided exactly what needs doing this week, I have been slightly side tracked by poems, a bit of a novelty as I have not really written them much this year. Sometimes a few of them will blurt out in a row.

A chat with Maureen this morning, as Lorraine heard her loaf tin for baking banana bread was not going to be delivered. Chirpy she was.  Mum chirpy too this evening, as their car miraculously got through its MOT again, and Mason got his expensive hearing aid adjusted for free.

Sonia back today having been in Bulgaria for months. Her husband Barry wanted to stay out there. A luxury to have a clean house without having to do it yourself.

I made off to the park at lunchtime to hang with my glassmates. Adele brought me a loaf baked with cheese and marmite. The new Rule of Six says we should not gather in groups of six even outside-- however it being a rule from Boris and his idiots there are exemptions, as Adele observed, if one of us had a dead grouse with us, we would be exempt, as Grouse shooting authorised by the government however.

As there were eight of us, but we hung out in two groups of four, near each other. It was the day after Frances's birthday so lots of the ladies had brought her a present. Rick, the other man there, had not nor had I. I bought her a cup of coffee.

Needless to say the cases are going through the roof, which has taken nobody by surprise except the government. The world beating track and test system is now on the verge of complete collapse.

Home again, talking to Bob, who has had an anxious and unpleasant couple of months. This 2020 is putting abnormal strain on folks.

Home for some more work this afternoon, but the force wasn't with me, and I went for a walk instead, up to my usual haunts. A shining sea today. Listening to my new lecture series about the Old Testament -- not loving it as much as the others, but fairly interesting. The lecturer makes quite a few unsupported assertions, which are irritating. Perhaps it comes with the subject matter.

Home and chatted to mum, and Lorraine arrived from work having survived another week. I collected a takeaway curry. A cheery night, we watched the last of the Des programs about Dennis Nielsen. Very well done I thought. Lots of people smoking fags (it was the eighties). It made my lungs hurt to watch them.

Below a glimpse of the shining sea in glowing black and white. 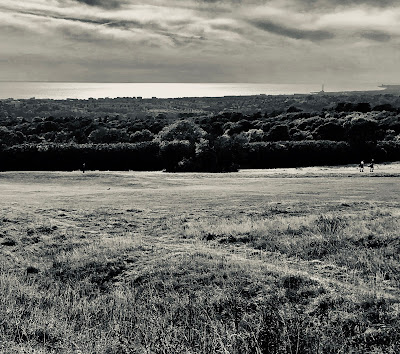