Sending Lorraine off to the front line, while I simply do some work for my French client and editing podcast material. Also was sent a lead on possible business from a pal, which I followed up instantaneously. Dawn came by this evening, and she had dinner with Lorraine, while I made off to The Caxton.

For my musical pals the beermonsters had convened for the first time since February. Jolly good to see them, although The Caxton not our usual haunt, but we were able to sit outside, and soon we were able to move our reserved table to one far away from anyone. I long for the times when you can simply have a beer in a pub with your mates, without neuroses.

Trying not to talk too much about Covid and so on. Alarmed to hear about Richard's strange nerve problem in his back, which means he is limping somewhat and unable to use one of his arms well enough to make a barre cord on his guitar. Apparently temperature triggers the effects, and it came on when he dived into the sea in the heatwave, in the water he found he was unable to move his limbs, luckily he managed to turn on his back and yell for help. He was dragged out, and taken to hospital. I would have found this alarming, but Richard is being stoical about it.

Nick and Steve on good form, Steve pleasingly moustachioed, and had spent the lockdown having builders finish work on his house, and painting and hanging wallpaper in his house. Nick chatting about growing his own hops and brewing beer, and the odd bit of hang gliding he'd been doing. But generally lovely to shoot the breeze with the beermonsters.

Beers were drunk, but the pubs are closing early these days, and we had left by 9:45. 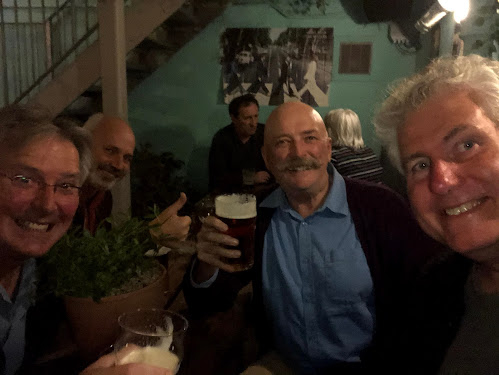