Not so productive today, which was a bit peeving. Fighting a losing battle, I instead made off in the afternoon to get my hair cut. I had to book in advance and leave my name, and the two remaining barbers there called me by it several times, not having known it before. Had a long chat with Stacey, who cut my hair shortly before my wedding day, and did a really good job today as then. He told me most of the regulars are not coming back still, and it has been a thin year for barbers. He was still cheery though, and happy to be working. There were two on today, and there was about six metres between me and the next chair. Stacey was wearing a facemask so it felt pretty safe. My hair looks the best it has done all year.

Home via Sainsburys. Working till Lorraine came home, and we cooked, and Lorraine nested on the sofa and watched some TV.

Struck by this stick man today. I can't explain why. 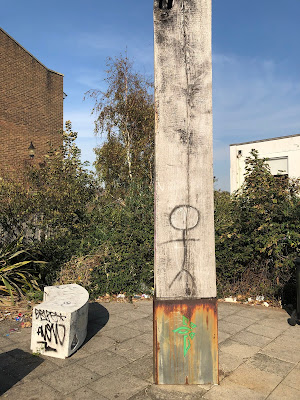