May 29, 2013
Up early and packing in a flap, before cabbing to Brighton station. A Flybe jet to Guernsey and only 40 minutes in duration. L and I had taken the sensible precaution of a gin and tonic in the Flying Horse in Gatwick so the flight was fine.

Arrived at the Barbarie in no time, the taxi driver totally taciturn. After a warm welcome and soup and sandwiches in the bar, we made off to Icart Point. By now the day had become utterly beautiful. Because of the long cold winter delaying blooming, now the sun has arrived the cliffs were jostling with colourful wild flowers. This is what my heaven looks like.

Lorraine and I sat on a bench looking west towards Petit Port. Lorraine crying as she loves the place so much. It was then because I can't imagine life without Lorraine I suggested we get married. Lorraine agreed, swayed by the powerful logic of the idea. As we were looking out to sea, feeling rather pleased with ourselves and distinctly romantic, three Germans with monstrous cameras appeared, stood immediately in front of us and proceeded to take photos of one another. Lorraine had the giggles. On retiring, one of them waved at the view and said 'enjoy!' Momentarily galling, but we both laughed and the three Germans are written into our story.

Both of us very happy.  I had surprised Lorraine and luckily it seemed to made her rather pleased.   Getting married seems entirely the right thing to do, and I had planned to ask her at Icart Point some months ago. In fact if I could press a button and already be married, I would do it. Except that I feel some species of large party is called for.

Then a walk around the sunny, flower-crowded cliffs till we were above Saints Bay, and then back to Icart where we had a slice of gâche each and a cup of tea. The owner gave us the benefit of his non-stop opinions for some time before we settled into the tearoom gardens, which due to the mad hatterishness of the its mercury poisoned owner makes me think of Alice in Wonderland, particularly with its profusion of weird echium pininana trees lending it an unreal air.

Back to the Barbarie, where we had a few drinks, some fizz with our knife and forkwork, and  discussed our plans excitably and at great length.

Below the flowering cliffs, and Lorraine and I at the scene. 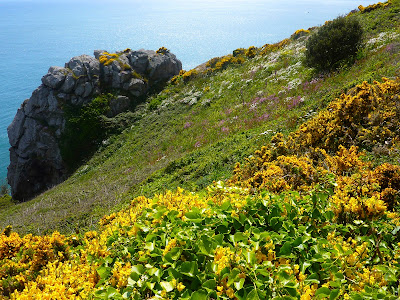 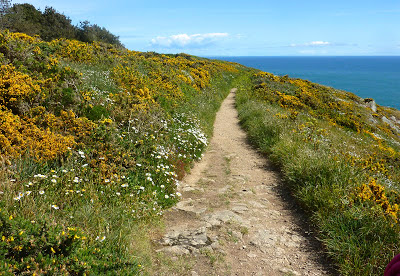 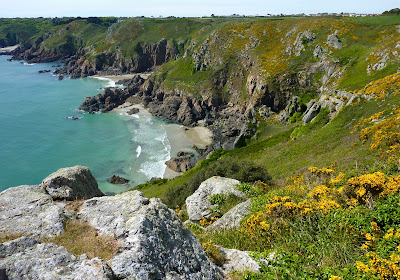 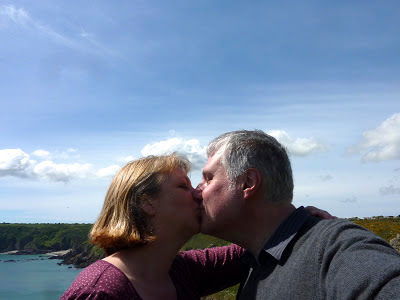 Kate said…
There is no way you two lovely people are allowed to get married without a massive knees-up. There are too many people who love you, both individually and together, not to!